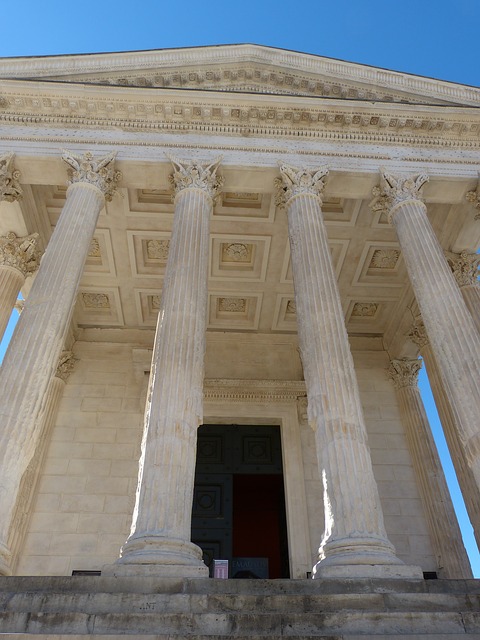 From The Fated Sky, part one of Transgressor Trilogy, a Fortune’s Fools book by E.M. Swift-Hook. You can listen to this on YouTube.

The hooves of his ponies clattered lightly past the plaza as they trotted up towards the Castle Hill. Alfor on the morning after the Fair, was like a party when all the guests had gone home. Durban found it slightly depressing and he was glad to be leaving himself.
A voice hailed him from the steps of the Temple of the Gods and he was not at all surprised. He stopped his pony and waited whilst a stooped figure came slowly down the steps and crossed towards him. It was an elderly woman, her face half hidden beneath the hood of her cowl, her body bent and shapeless in its robes. She laid one hand on his bridle and looked up at him with clear blue eyes that held no trace of the ravages of age. For once Durban felt no desire to smile. He sat quite still, whilst the pack ponies shifted restlessly behind him.
“I suppose you have come to tell me not to do it.” His voice sounded even to his own ears like that of a petulant child and the old woman smiled gently.
“Should I tell the wind not to blow, or the sun not to rise? Your nature is to act as you should do.”
“Then why are you here?”
“To offer you a gift.” Durban felt uncomfortable beneath the calm blue gaze, exposed and vulnerable as if his very thoughts were open to being read.
“I have all I need,” he said sulkily.
“I am sure you do. But a man who tries to yoke and drive wild stallions needs more than a good whip and a steady hand.”
She could read his thoughts, curse her. He shifted his gaze to stare deliberately at the slowly brightening skyline.
“You should be pleased,” he said, his voice stiff with resentment. “It’s what you want after all.”
He heard a strange sound and realised that she was laughing at him.
“My dear child, whatever gave you the idea you could act otherwise?”
“Just say your piece and let me go. I’m expected at the castle.”
“Very well, I do not seek to delay you. But my gift is of knowledge – so perhaps you would prefer to pay for it? Shall we settle on a favour in the future?”
His eyes were drawn back to hers by her tone and he read a far from gentle mockery in the vivid blue depth and felt a slight sick sense of claustrophobia.
“Please –” he began, but the words choked in his throat and he felt himself incapable of movement of any kind.
Be warned, the voice seemed to come from within him. You think your fiery steeds an even match, but one is stronger than you know – strong enough to break the traces and trample you beneath its cutting hooves and what then, my brave charioteer?
“What should I do?” he heard his own voice although he had not willed it, but could not tell if he had spoken the question in words or thoughts.
Use the reins lightly and spare the whip. If it is racing its team-mate, it will not notice the direction it runs, nor mark the distance covered. And when the race is done you will bring him to me.
The voice stopped and Durban became aware of the first sounds of the city stirring to meet the new day. He blinked and found himself frowning at the woman.
“Why do you do these things to me?” he asked, to his own ears sounding half plaintive child and half frightened man.
The old lady smiled with the serenity of youth.
“Because you are my gift to Temsevar and it never hurts you to remember now and again that whilst you make the puppets dance, your own strings are tied to my fingers.”