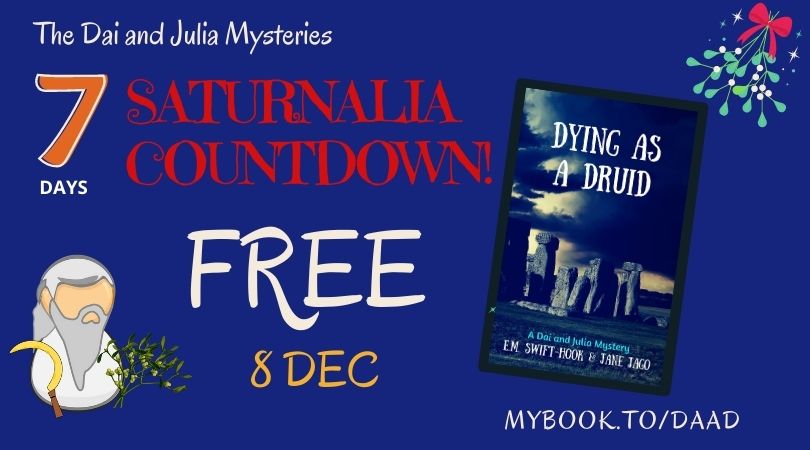 It was the longest night and the fires in the sacred grove turned the oiled muscles of the naked young men to liquid fire. The old men watched from under their wrinkled eyelids as the goddess made flesh walked among them. She was beautiful and in the firelight something more than mere beauty with her red-gold hair cloaking her nakedness and the stag horns that seemed to grow from her forehead. She touched each young man with a delicate forefinger and whenever one pleased her they lay down in the loam together as the goddess and the god. The young men not deemed fit to serve watched in envy, save for the one who filmed covertly smiling to himself as he did so…

In another place, not far away geographically, but a million miles from the rites of the Druids in terms of intent, Julia Llewellyn was also naked in the the firelight. She was lying in her husband’s arms, noticing how her own mediterranean olive complexion looked golden in the warming glow and tracing the pink patterns the flames made on her man’s white Celtic skin.
“How does anybody even get to be so pale? You look like one of the marble statues in the forum. Just stick a helmet on your head and you’d be a dead ringer for any of the minor gods or messengers.”
Dai moved swiftly, pinning his giggling wife under him and tickling her ribs.
“Minor god, is it?”
“Is,” she said firmly, “the likes of Jupiter and Vulcan are always depicted as old men with big beards.”
He laughed down at her and she wriggled out from under him pushing against his broad chest with one small hand. He rolled on his back and she straddled him, grinning cheekily.
“You look a bit happier now. So? Are you going to tell me what chapped your arse today?”
“How come you always know?”
“I have eyes, lovely boy. Now spill.”
Dai sat up, so that his wife straddled his lap and rested his chin on the top of her head.  Julia, being Julia, couldn’t resist a naughty wriggle. He pulled her closer and sighed.
“Smooshing my nose Llewelyn. And I really do need to know what upset you.”
“It’s that moecha Cariad. It’s been playing on my mind all day. I think she’s up to something.”
“And that’s surprising because?”
He snuffled out a reluctant half-laugh.
“It’s not. What is surprising though is that I find I mind on behalf of Caudinus. He’s actually a decent man. Not just decent for a Roman Magistratus, just plain decent. And he obviously loves her, blindly and absolutely. But she is equally obviously bored and discontented.” He gave Julia a brief, twisted smile. “When we were there for dinner and gift giving the other day, she was walking a thin line. First there were those pointed comments over dinner, then we had the Game of Truth. Everyone else was being light and flippant, but it was as if she was trying to dig out the most excruciatingly inappropriate incidents she could think of. Asking you where – and when – you lost your virginity. Making me confess the embarrassing donation I made in the name of science during my academy days, though she knows how much I hate being reminded of that. Dragging out the personal humiliation of poor Caudinus when he was falsely accused of sleeping with his boss’s wife. And then lying in her teeth about her own dalliances. Manufacturing a blush.” His voice shifted to mimic Cariad’s sultry tone. “‘One before my dear husband…’”
Julia quirked an eyebrow.
“I know of at least a dozen” Dai said wryly.” She was and possibly still is, as randy as a mare on heat. But that isn’t my worry. I’m afraid she’s getting fed up with him. She was so mean to him about his Saturnalia gift to her and he tries so hard. I keep seeing the hurt in his eyes.”
Julia took his face between her palms.
“Dai bach, from where I was standing it was obvious that she was fed up with him on the day of their nuptials.”
He gaped at her and she couldn’t help loving him for his naïveté along with his more potent charms.
“So why did she marry him?”
“I’m guessing the lure of being queen of Viriconium was too strong to be resisted.”
Julia felt the sigh her husband heaved and put her arms around him, kissing his chest as that was the nearest bit of him.
“Promise you won’t ever get fed up with me, Julia fach.”
“I think you are pretty safe there, lovely boy. Aren’t you the other half of my soul?”
She pulled his face down to hers and kissed him rather seriously.

Later, as they lay in bed under the goose down comforter, Dai pulled Julia so she lay across his chest.
“What do I have to wear at this gods-forsaken function tomorrow? I’m dreading it, the annual temple turn out for the birthday of the Divine Diocletian I mean. Outside? December? Toga?”
Julia smiled down at him.
“No. Tunic and trews and a good warm cloak. You have new trews and tunic in fine cashmere wool. You’ll be fine. You should rather have pity on me, as women are not allowed to wear trousers in the temple precinct. But I do have some thick woollen stockings that make my legs look really fat.”
He laughed and they drifted off to sleep in happy intimacy.

The next morning they had to be up well before dawn. Julia had just got in the bath and Dai was shaving when there came an urgent trill from Dai’s wristphone which he had left beside the bed. Dai wrapped a towel around his waist and went to see what was afoot, carefully closing the bathroom door behind him. Julia had a bad feeling about someone calling before it was properly light so she jumped out of the warm water and towelled herself briskly. Before she had finished dressing Dai was back. With his work face on.
“Sorry love, looks like I get to miss the ceremonials. Message from the landlord of the Dragon and Leek on the Ynys Mon road. A bit garbled, because the place is deep in a valley in the woods and the comms are merda, but something about a fine lady gone missing and two dead Roman outriders. I’ve roused Bryn and the posse.”

You can keep reading Dying as a Druid by E.M. Swift-Hook and Jane Jago for free if you download it today 8 December.

2 thoughts on “Saturnalia Countdown ~ Dying as a Druid”