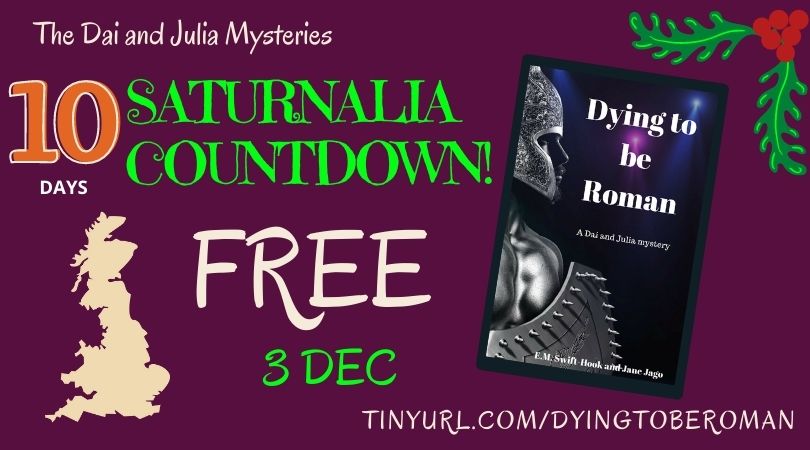 “Notebook entry. Confirm date, Post Ides, Maius. Time, night watch, at two twenty three, and location Augusta Arena, Londinium, Britannia Maxima. Looks like the report of a murder was not wrong. He seems pretty deceased to me.”
Under the brilliant lights of the pitch, which turned night into day, the body would have looked gruesome anyway. It had no face. But laid out as it was on a white sheet, the injuries seemed to stand out more. There was no blood but…
Dai wished he had not put quite so much garum on the chips he had been eating less than an hour ago. Even after more than eight years in the job he still found he had little stomach for the messier end of it. At least the hands seemed to still be intact, which made part of the process a lot easier. He pressed the touchscreen of his identipad against one finger and then entered the other necessary details. DNA and fingerprint checks both came up. Which was unusual as most murder victims were unregistered on either database. But when he saw the image he knew why this one was different.
This had once been Treno Bellicus ‘Big Belly’: one of the leading lights of the Caledonian Game team here in Londinium for the Games. That had to be more than ironic.
Dai, like every schoolkid in Britannia, knew that an arena had stood here since before the Divine Diocletian had rebuilt the Empire under his heavy hand, spreading his brand of Romanisation as far as his arms would reach and at the same time snatching back the privilege of being a full citizen from all born outside Italia. Back then, the arena had staged the kind of barbaric and bloody spectacles ex-patriot Romans expected. And now? In all honesty, Dai could not say it was too much different. It might include a ball as a sop to those who wanted to call it sport, but the brutality remained the same. The Games in all their unrelenting savagery. Those who couldn’t be there in person to taste the dust and smell the blood could freely watch the spectacle on the screens on every street corner and in every public building. Bread and Circuses.

The prize that lured the finest athletes of the provinces to risk life and limb was otherwise unattainable Roman Citizenship, and this poor bastard had been a star player. A broad-featured face looked out of the screen on Dai’s wristphone, wearing a manufactured snarl; behind him was a virtual backdrop with sports drink logos and other product placements. Well, those sponsors had just lost one of their money-spinning assets.
Reluctantly, he returned his attention to the body and bent over it to peer at the visible injuries as he made his initial informal observations. It was as much talking himself through coping with the gruesome scene as anything of real value.
“Victim ID biometrics confirmed. Body is supine. Been dead the last four hours. He looks like he has been laid out all ready for anointing and Charon’s obol. But placed on a white cloth that I’m willing to bet half my next salary is going to be a bed sheet. Body was bled out, through the throat – ugly gash there – and cleaned up before being put here. The other half of my pay is going on the certainty there will be nothing on the body we can use to ID the killer. Other injuries I can see -”
One of the disadvantages of being a plainclothes investigator was it seemed to lead to less respect from civilians, especially from Roman civilians.
“Llewellyn?” the voice was coolly condescending.
Even though he had told his decanus to keep everyone away, Dai was grateful for the excuse to straighten up and stop looking at the corpse.
The woman who stood there was in her thirties, with classic Roman features; she wore her fashionably short stola over close-fitting leggings and boots. For someone who must have been dragged out of bed in the small hours, she looked very well turned out and made Dai wish he could cover the small stain on his tunic where he had dropped a chip when the call to attend this crime came through. Her name badge declared her to be ‘Annia Belonia Flavia’ and said she was Curatrix Prima. No doubt in charge of this arena. She was frowning at him and he realised he must be staring.
“That is indeed who I am, domina.”
Behind her back he could see Bryn, his decanus, looking guilty. So he should, but Dai had the feeling this woman was not the kind to be easily put off.
“Do you you know how this happened?” she demanded, as if it was Dai’s fault the body had been left in the middle of her pitch.
“Investigations are already underway,” he told her smoothly. “We have identified the victim and my people are questioning everyone who might have seen anything here.”
He had tried to put himself between her and the body, but she sidestepped and looked. Her hands went up to her face and the skin behind them looked almost as pale as the corpse, leaching into a light hint of green. To her credit, she recovered without vomiting, but she stepped back and took a breath before restoring the gravitas expected of a Roman matron.

You can keep reading Dying to be Roman by E.M. Swift-Hook and Jane Jago for free if you download it from Smashwords.

If you would like to listen to this extract as you read, or instead of reading, you can – on YouTube.