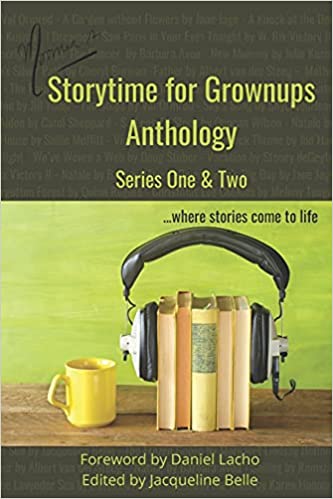 This all started as something fun to do during covid-19 isolation – to promote positive mental health especially for those isolated… it turned into so much more.
Storytime for Grownups showcases indie and traditionally published authors of various genres and writing styles, becoming a group of authors from a variety of backgrounds, experience, ability and live in many different countries throughout the world.
When the covid-19 lockdowns began around the world, people were isolated in their homes, cut off from their family and friends. Some people were experiencing unemployment for the first time or financial burdens that they were not prepared for, others were overworked, overstretched, and stressed. Many of us lost family, friends, coworkers, neighbours, and the people around us. Everything was uncertain, in many ways, things are still uncertain.
My world didn’t lockdown for quite a long time, I continued to work and move about my world almost as normal. But this was not the case for most others. I watched as the Twitter #WritingCommunity struggled. Too much time, not enough time, nothing was in balance. One day, a Twitter friend said that they had not heard another human voice in weeks, and they really wanted… needed to hear a story, any story, something to take them away from reality, even for a few minutes. So, I read them a story. I recorded it and placed it on my YouTube channel. Then, I read another and another. My Twitter avatar, @Moomii_Moo, played host and gathered the regular morning breakfast group together for stories. The collection of stories grew, some written by myself, Jacqueline Belle, and many stories and poems written by other authors in the Twitter #WritingCommunity.

Here’s just a taste of what you can read in the book or hear on Jaqueline Bell’s YouTube channel:

It was just past midnight, though the sky seemed extra dark
And all the little steam engines were gathered in the park
Then something broke the silence with a rattle and a creak
The oldest engine cleared his tubes, and he began to speak
“There are not many nights”, he said, “when we are gathered near
So I would tell a tale if you might have the will to hear”
The wheezing and the whistling was no louder than a breeze
And yet a tiny engine whispered, “Will you tell us please?”
“It happened very long ago, my father’s father’s story
When Owen Owen rode the rails to fame and shining glory
He was just an engine, and his livery quite worn
He pulled the ore from down the mine and worked from night to morn
But then one day in winter, he was give a big surprise
His driver and an engineer they fitted him with eyes
Clear and shining brass they were and bright to light the way
And driver said they made the mine as bright as any day
What Owen engine thought of them was never very clear
But those bright eyes they lit the miners way throughout the year
For two days every winter the pit was put to bed
And Owen Owen engine was left peaceful in his shed
He quite enjoyed the rest he felt his heavy toil had bought
And closing down his brassy eyes he sat in happy thought
Until one night when all around the fog was thick and yellow
His rest was interrupted by a fat and jolly fellow
‘Owen Owen’, said the man, ‘I’ve come to ask your aid
I’ve toys to take to children but the reindeer are afraid
They cannot see through this thick murk and fear to break their legs
Will you help us out dear chap? Or do I have to beg?’
And Owen Owen smiled a smile as wide as wide could be
‘Open up the shed’ he said, ‘that’s just the job for me’
And so it came about upon that darkling winter’s night
That Owen Owen guided Santa with his eyes so bright.”
And every engine in the park gave a quiet beep
Before they closed their iron minds and tumbled back to sleep

A Bite of… Jacqueline Belle

Question one: What inspired you to begin such a massive undertaking?
I had to think about this question for quite a long time before I could give you an answer. I decided that it would be best to tell people ‘Our Story’. Please, come and have a listen.

Question two: You are something of a Renaissance woman – poet and voice artist – where is your first love? And how do you apportion your time?
A Renaissance woman… that is quite a compliment Jane, thank you. I believe that statement is quite accurate. I love to learn and explore and create. When something appears in my mind and if I feel the need to create it, then I will. It doesn’t matter what it is, I will find a way to express my vision. I have many creative projects that I am tinkering with in the background. Some include voice work, some are written, others are musical, many are visual, and some are even tactile. Most of my creations are a combination of the arts and my goal is to stimulate all the senses. I like to think outside the box and follow my own intuition. So, to answer your question… my first love? I simply love to create.

Question three: You are having a dinner party and can invite any three guests (alive or dead). Who would you invite and what would you say to them?
I love a good dinner party! Any three guests for you and I to enjoy? Well, first, I would invite Daniel Lacho from Guru Art Lifestyle Entertainment, because he inspires me nearly every day and I would love for you to meet him. Secondly, I would invite Sir Richard Branson, because I find his innovation, curiosity, and fearlessness fascinating and infectious. Thirdly, I would invite the musician, Sting, because his musical talents are so diverse and creative, and maybe if he fed him something really yummy his would sing something for us.

Jacqueline Belle is also co-producer and narrator for Moomii’s Storytime for Grownups and The Full is a poet, creator, voice artist and an award-winning author with three published poetry collections: When I Walk Upon the Earth, The Collection: a poetic exploration of friendship, love, fantasies, and the soulmate and The Weight of the Universe. Her writing goals are to reach the reader by touching all of their senses. Watch for Jacqueline’s debut novel releasing in 2022. This mystery thriller will give you a taste of something different… sex, violence, beauty, and intrigue. Can these all co-exist? Keep your eye on Jacqueline Belle on Twitter to find out.

Storytime for Grownups is coproduced with Daniel Lacho of Guru Art Lifestyle Entertainment.