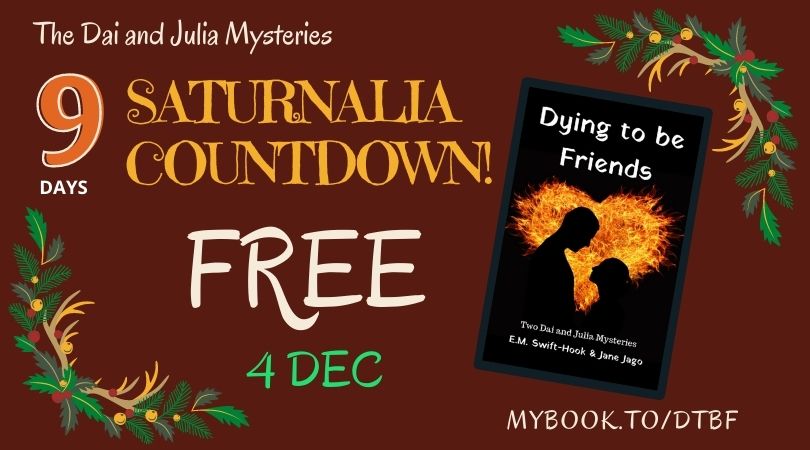 The boot would have caught him in the head. Dai rolled away as it swung in and he took it on the shoulder instead. But the rest of the pack were about to catch up and after the last experience of that, he knew he had two choices, surrender at once or hold on, count the moments and pray. The decision was taken from him as the whistle blew across the field.  Which was just as well because he could not have taken much more punishment.
A hand reached down, attached to a brawny arm.
“Well done, you’re not bad at this are you?”
The mud smothered ball was clutched close into his body and Dai, still winded and bruised from the last assault, took the hand, grateful for anything that might help him back on his feet. A moment later he was reeling back on the ground, shoulder probably half-dislocated as his erstwhile helper was holding the ball aloft and making an earsplitting hooting noise.
Dai lay still, closed his eyes and let the world revolve around him for a few moments. The jubilant cheers and back-thumping slowly faded. It was not the first humiliation he had endured since he had started his career in the Vigiles and he was willing to bet it would not be the last. But at least it would be the last he had to endure on this training course.
This ‘team building’ event was meant to be a treat for the final day. A reward for all the hard brainwork they had been required to put in to qualify for the rank of Investigator. Random draw assigned the teams and they had spent the morning training. Dai had contemplated feigning gut cramps to escape the afternoon match and now he wished he had.
He became aware it was starting to rain. Britannia in the early spring tended to wet and the ground they had been playing on was already part mudslide. The drops were heavy and he decided he was not hurting quite so much any more and probably ought to get up.
“Spado!” He recognised the voice of his team captain and opened his eyes, pushing himself to his feet one knee at a time. A far cry from the players you saw on the sports channels. They would take all kinds of a kicking and just roll to their feet and jog off.
“You must be the most stupid cunnus I ever played in a team with. Giving the ball away to the other side – and that after the whistle.”
“The game was over and I thought -”
“You thought you’d fall for the oldest trick in the book? The rules are merda, Llewellyn – just like what you keep inside your skull. This is harpastum. The Game. They had the ball when the ref got his first view of it after the whistle.”
The anger and disgust on the other man’s face was so intense Dai found himself sinking into a defensive stance. He had no idea how to play harpastum, the messy brawls for glory had never appealed to him, he’d avoided it like the plague during his school years opting for other sports, running and swimming being the ones he favoured most, but he knew how to fight when he had to, that had always been on the sports syllabus in his life. The other man seemed not to notice, he had already turned away and was jogging back towards the building.
Wiping at a splotch of mud which was sliding over his eye, Dai realised he was only spreading more mud as his hand was coated too. In fact, there was not much of him that was not. He squelched back across the pitch, the rain picking up as he did so, and by the time he stepped into the changing rooms, the mud was cascading in rivulets on the floor behind him. He pushed open the door and the conversation dropped as the entire nineteen man team glowered at him.
Dai shook his head and walked past them, heading for the welcome warmth of the shower room. He might have lost the game, but of the five points they had made, two had been his and owed more to his running skill than anything else. The other three had been scored by their team captain, but then that was a man who had been in the under 20s finals at Augusta Treverorum six years ago as he had proudly boasted when putting himself forward for the role. They also seemed to have overlooked the fact that Dai had been the one clutching the ball and defending it with his body when the whistle went. Which, he had been told, was the way to ensure victory in this game. No one had bothered mentioning anything about after the whistle.

You can keep reading Dying to be Friends by E.M. Swift-Hook and Jane Jago for free if you download it today 4 December.