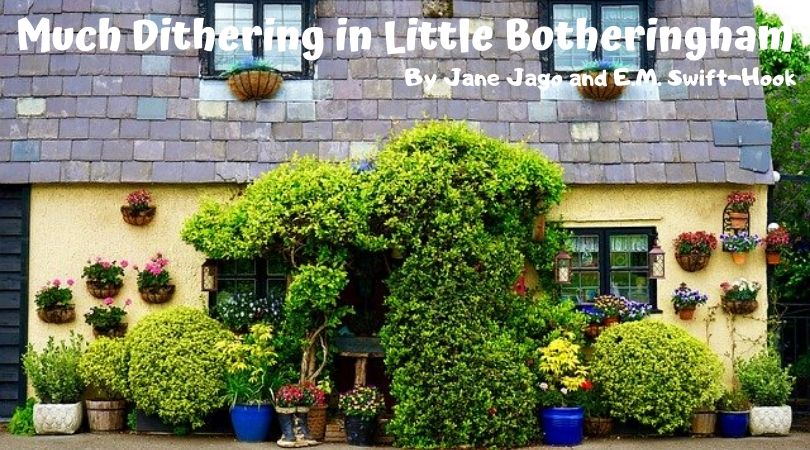 After everyone had gone, Em picked up the phone and called the young man who had so enjoyed the batshit madness of the vicar. The phone was picked up at once, but she found herself speaking to a young woman with an attitude problem.
“I don’t know where you got this number, madam, but Tristram is far too busy to be bothered with random callers.”
“I got the number because he gave me his card. Now just be a good girl and put him on the line.”
“I can’t do that. Tristram only takes calls between eleven and midday.”
Em sighed. “He told me to call at any time. I do a rather nice line in batshit crazy vicars.”
“Oh are you Mrs Van der Velt?”
“No. I’m Emmeline Vanderbilt.”
This took a bit of processing but eventually got Em passed to the man himself.
“Sorry for the delay.” He apologised perfunctorily. “What can I do for you?”
“You can answer a question to start with.”
“Fire away.”
“Is Ronald Dump newsworthy?”
“Depends what he is doing. Opening another of his dreadful leisure facilities is nasty but not news.”
“I’m rather hoping for not opening and consequently losing his shit in public.”
“For even a chance of that happening I’ll have a camera crew wherever whenever.”
“Right. So can you have the dim bird, who I assume must be pulchritudinous in the extreme to keep her job, put me straight through when I call because there may not be too much notice.”
His laughter sounded genuinely amused. “Pulchritudinous isn’t a word one normally hears used in conversation around here. Although it perfectly describes Amanda.”
He stopped speaking and Em could hear scrabbling in the background.
“Sorry,” this time he even sounded it. “There’s no good trying to get anything as revolutionary as putting someone straight through into Amanda’s head. You can text this number and I’ll get right back to you.” He reeled off a string of figures and Em wrote them down.
“Okay. I’ll call you if I can make this happen.”
“I look forward to that call. And. Mrs Vanderbilt. Good hunting.”
Em put the phone down, thinking how the idea of discomfiting Dump seemed to be able to bring together the most diverse of people – the unprincipled and deeply selfish Tristram, and Ginny, the newest and most PC of vampires, being a case in point. Whatever. There was no time for wool gathering – she had a tenants association to sort and an unprincipled lawyer to contact.
By the time she was done, Agnes’ army of granddaughters and great-nieces had mined the seam of council paperwork to some effect. The email was long, rambling and informative. There was indeed a planning application on the books. It postulated an eighteen-hole golf course, a boutique hotel, a restaurant, a range of holiday homes, and a range of shops. Access was, of course, to involve the demolition of the housing association properties.
None of that surprised Em. What was surprising, though, was that the applicant (and the owner of the land) was quoted as being DumpCorp.
“Got you you bastard.”
Em’s smile, could she but have seen it, was a feral thing. She called Agnes.
“You still got a girl in the Land Registry?”
“My great-great niece, Morwenna.”
“Right. I need to know two things. Has Harmful Gums actually sold his land to DumpCorp? Also has the housing association done, or tried to do, anything with the land the estate sits on?”
Em could almost hear Agnes thinking. “Okay. Can do. But I may not be able to get hold of her until tomorrow. What has just come in. From Jamelia. Is a full copy of the agreement the tenants have with the housing association.”
“Good. That was what Ishmael wanted.”
“Em! You have never called in Ishmael.”
“Why not? He’s a very good lawyer and just as slippery as anybody they might have.”
“But Ishmael is a demon.”
“So are most of the legal profession.”
Agnes sighed and Em could picture her throwing up her hands in despair. “Okay. Have it your own way. But who is paying him? As if I didn’t already know.”
Em put the phone down and made herself a cup of blood tea. When she got back, Agnes was still talking. Erasmus stood beside the phone with his face arranged as close to a smile as a bat can get.
He spoke in Em’s head. “Nothing new. Except that she wonders how DumpCorp expected to get away with downright illegality.”
“Me too.”
“In a moment I will tell you. For now, finish your conversation with Agnes.”
Placating Agnes took a good ten minutes and left Em feeling worn and scratchy. She had also committed to an emergency Nest meet the following day to discuss the problem and to introduce their new sister.
“Why do I listen to her, Erasmus? I mean she wears plastic clogs and loud floral printed smocks. Her idea of tasteful is chintz and shag pile. And she eats takeaway burgers…”
Erasmus actually chuckled. “You listen to her, Emmeline, because she is your oldest friend and she has always had your back no matter what. But now. Do you want to hear what the vespertilian community knows about DumpCorp?”
“I’m all ears.”
He sighed. “That is a singularly inept piece of human phraseology. But I digress. DumpCorp expects to get away with overt law breaking for a number of reasons. One. It always has. Two. It effectively owns two High Court judges and a Law Lord. Three. It will have its fall guys lined up. Probably Harmsley-Gunn, the chair of the county council, and your local MP.”
Em sat down with a bump. “That’s masterly Erasmus. Do they have us beat then?”
“No. Not with the supernatural community against them. This time I reckon the corporation has bitten off more than it can chew.”

Part 25 of Much Dithering in Little Botheringham by Jane Jago and E.M. Swift-Hook, will be here next week.