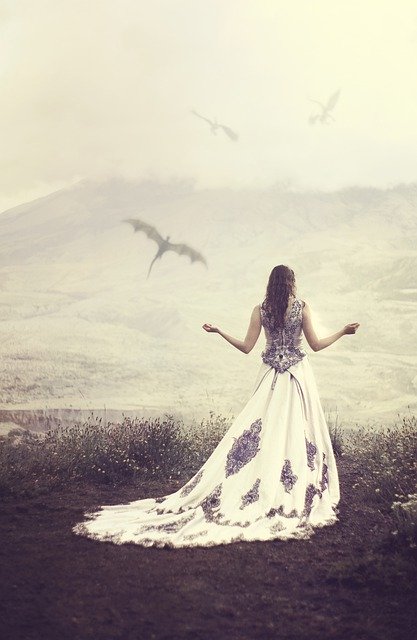 It was quiet in the garden and Leonore sunk to her knees, grateful for solitude and silence. As the sun dipped below the horizon a cool, white moon illuminated the jasmine that crept up the side of the garage. The heady scent filled the air, and a cloud of tiny white moths gathered among the star-like flowers.
Suddenly almost unbearably weary, Leonore lay back in the cool grass. Tears pricked behind her eyelids as a cold weight settled on her shoulders. She sat up and hugged her knees to her chest, feeling the cooling air against her hot cheeks.
How long she sat in silence she didn’t know, and then she heard a voice.
“Alone and sad? Why so?”
Her eyes snapped open, but she could see nobody.
She heard a chuckle.
“You will only see me if you close your eyes.”
She obeyed and found herself looking into a pair of golden orbs with vertical reptilian pupils. She concentrated and slowly, slowly a face assembled itself around the eyes.
“Are you a dragon?”
“I am whatever you want me to be…”
Leonore found herself laughing.
“That’s a politician’s answer if ever I heard one.”
The dragon smiled dragonishly and blew a breath into her face. She smelled menthe and cinnamon and something hot and exciting.
“Oh. I can smell you.”
“Of course you can. Now you can open your eyes.”
The dragon sat beside her. His iridescent scales seemed to gather the moonlight and reflect it back in a myriad of shifting colours. She looked at him for a very long moment.
“But I don’t believe in dragons.”
“Of course you do. You wouldn’t be able to see me if not.”
“What do you mean?”
He showed his teeth in what looked like genuine amusement.
“It’s elemental my dear, it is only belief that makes dragons visible. Unbelievers can never see us.”
“Never?”
“Not ever. If an unbeliever was sitting next to you he or she would neither be able to see nor hear me.”
Leonore remained unconvinced, but was pleased by the company anyway.
“What is your name?”
“I am R’u’uth. And you are L’e’onore.”
Leonore tried both names, rolling them around on her tongue as if to taste them. Finding them pleasing she laughed delightedly.
R’u’uth laughed too.
“That’s better. You don’t sound sad any more.”
“I don’t feel sad.”
“Good. But now you need to sleep.”
“Sleep. If only I could.”
The dragon breathed on her and she felt the benison of his presence.
“Lean on me and you shall sleep.”
She frowned but found herself drawn towards the shining presence as iron is drawn to a magnet. Before she knew she had even moved, her back was resting against the dragon’s smooth spicy-smelling skin. Even as she would have protested, her eyelids drooped and she drifted gently into slumber.

She awoke early in the morning with the rising sun in her eyes. For a moment she didn’t know where she was or how she got there. She stretched and heard a chuckle. She turned and spread her hands against R’u’uth’s smooth warm scales.
“Thank you,” she said softly.
He blew a breath on her and spread his shining leathery wings.
“Until later.”