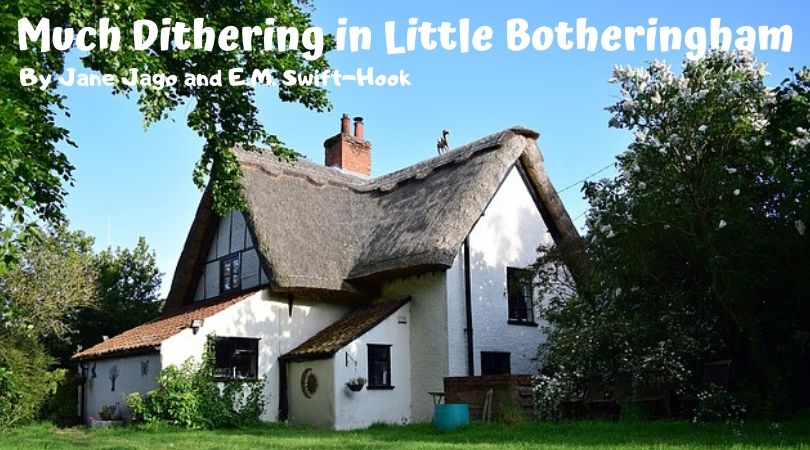 Agnes and Petunia looked Ginny over carefully as she slept. Finally, Agnes grinned.
“Looks as if we got away with that one. Aside from the fact the hair on her head seems a bit less wispy and her front teeth are a bit prominent, she’s just the way she was.”
Em was bitterly tired but she managed a smile, and when Arnold offered her a cup of something steaming she took it gratefully. It was soup, and it helped. However, what she really needed was blood tea, and a lot of sleep. It shouldn’t have been a surprise when a puffed-out Agnes handed her a tall mug from her own kitchen. She drank deeply and felt a measure of strength seeping back through her bones.
“Now what?”
Agnes indicated the trussed-up were with a lift of one of her chins.
“Good question.”
The voice was unfeasibly deep and came from the doorway. Em smiled a weary smile.
“Come in Leodigrace. Come and tell us how the heck that one got away from you.”
The shadows readjusted and a tall man came quietly into the church.
“He didn’t get away, Emmeline. He slipped under the radar. I can find no trace of anybody knowing anything about him. Although someone did. And we will find out who.”
Agnes gave the big lycanthrope a dirty look. “Not wishing to be thought unwelcoming, or anything like that, just how did you happen to be in the area?”
“I didn’t happen to be here. I was having a meeting with the bishop – about yon bunny rabbit – when I suddenly knew something was happening here. I hurried…”
“Now you are here,” Em managed to sound severe even in the face of gnawing fatigue, “can we leave the disposal of that poor mad creature to you?”
“You can.”
Leodigrace bent over and lifted Doug Turner as easily as if he was a tiny child. Then he was gone.
Arnold looked at the three women. “I don’t suppose anybody is going to tell me who or what.”
Em shrugged. “You’ve seen too much already, so why not. Leodigrace is the big cheese when it comes to weres. And he’s the biggest effing wolf you have never seen in your life. He might eat bunnies for all I know. And now I have had about enough. Will you carry Mzzz Cropper over to my house please?”
Arnold swallowed, then pulled himself together. “I will. Then I will come back and scrub the floor.”

By the time her unwanted guest had been installed in the guest bedroom, Em was feeling the full effects of a very trying day. For once the age she felt reflected the age she looked and it was not entirely down to the drain of creating a new Sister. Agnes had sensed it, of course, and insisted on organising everything, making Em sit in the lounge with her feet up whilst she sorted the settling in of the Cropper woman.
“Do you think I’ve made a mistake?” Em asked when Agnes placed a brandy in her hand and sat down with one herself.
“Not like you to second-guess yourself, Em.”
The brandy helped. It tasted of fire and nostalgia.
“No. It isn’t. I think I am still trying to work out how I missed all the signs about Doug Turner. How could there be a were – or any kind of supe – wandering around the village and I just didn’t notice?”
“None of us noticed, not just you. So stop blaming yourself. You’re tired and a good rest will see you right as rain.” She finished her brandy and stood up. “Now I’ll leave you to it. Do you want me round tomorrow to help out with explaining things to our new Sister? It’ll be a bit of a shock for her as we didn’t have a chance to do the pre-chat and all that.”
Em groaned.
“And I can just imagine how she’ll take it. This is one I’m really not looking forward to.”
“She can’t be worse than Petunia was can she?”
“Maybe. After all, according to Angela Pendle-Burton she’s a committed vegetarian.”
Agnes’ mouth formed an exaggerated O shape. Then she laughed.
“Well that will be one for the books.”
“Exactly,” Em said. “What the hell do we do with a vegan vampire?”

Part 16 of Much Dithering in Little Botheringham by Jane Jago and E.M. Swift-Hook, will be here next week.