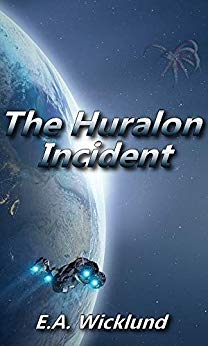 “We’re still running for it?” murmured Zahn as he stood next to McCray.
McCray consulted the tank. “We’re thirty minutes from the heliopause. He can only target us with one of his two lasers while chasing us. We’ll make it into hyperspace before he gets a good hit on us.”
One of the first things anyone learned about space combat was that the vast majority of laser shots missed. Because of the enormous distances involved, the information on a ship’s location could be many seconds out of date. In that time a ship could have moved thousands of kilometers from the last-known position, and it could be anywhere in a large volume of space. McCray felt that laser fire amounted to a crap shoot—a guess at where the target would be.
“Inbound signal,” said Ando, looking anxious, but then it was his first combat “Liu’s demanding we shut down our paddles and heave to.”
“Tell him to to piss off,” snarled McCray.
“Sir?”
“You heard me.”
Another red blast streaked past on the tactical displays, closer this time.
“Fourteen seconds between shots,” said Warwick. “A fast cycling time, but not for the smaller FireDragon lasers.”
“Copy that, Eyes,” acknowledged McCray. “Liu can shoot all he likes. he’s never going to hit us hard from that range. His laser will attenuate too much to do anything serious.”
“Twenty minutes to the heliopause,” said Zahn.
“We’re slipping away,” said Warwick, and McCray glanced her way as her fingers dancing across her screens. She looked tense—lines forming on her otherwise smooth features—yet still focused on the job. “He’s five light-seconds behind and we’re opening the range.”
“You see, people?” McCray was grinning. Many of them had never seen combat before. They needed to know he had the situation well in hand. “We’re too fast. He’ll never catch us.”
The ship shuddered suddenly. Red lights flared across their displays. DC1 Xiang,  the tall, pale-skinned damage control specialist suddenly appeared beside Warwick.
“Hit on Number Two Hyperengine,” Xiang reported “About sixty tons of armor blown off. Cosmetic damage only.”
“A lucky shot,” grated McCray.
“Standby,” said Xiang, looking worried. “More data coming in. Critical hits on the hyper control runs. Secondaries are down too.” She looked up, the shock plain on her face. “Captain, we cannot enter hyperspace!”
“That’s not possible,” growled McCray, feeling the same shock. He gestured in the air and a screen opened with the harried face of Chief Engineer, Commander Guillermo Parsamayan. “Gui, what the hell happened?”
Gui looked frustrated. “A one-in-a-million shot, sir. Shrapnel from the strike slipped through a gap in the armor and hit both the hyperdrive control runs. This is supposed to be impossible.”
“How long to fix it?”
“I need a couple days at least.”
McCray felt his face sag. “Two days? You gotta be joking.”
Gui shook his head. “No way around it, sir. I got the nanoprinters making parts now, but hypercontrol junctions are complicated pieces of kit. Hyper capability is down for now.”
“Keep me informed, Commander.” McCray ground his teeth in frustration. How could a piddling little pirate do this to his ship and from such a long range? What would those assholes in the admiralty say to this? Whatever the reason, the choices on action had become far simpler now. “Helm! Roll ship and come port to 2-8-5.”
The maneuver neatly unmasked three of Springbok’s lasers. She had four lasers to the Brazil’s two, but while Brazil could only fire one laser in a stern chase, Springbok’s cleverly designed geometry meant she could return fire with three in the same stern chase. At the helm, Raj replied to his order as McCray turned to Lieutenant-Commander Piper. “Guns, you have a targeting solution?”
Piper grinned ferally. “Locked and ready, sir.”
“Fire!”

A bite of… E.A. Wicklund

Q.01 What do you think drew you to writing Science fiction?

From an early age I studied military history, particularly aircraft during WW2. Technology proceeded at an incredible rate during the conflict. I found myself researching not only the technological developments, but the stories of how pilots used them. What were the advantages/disadvantages of the plane? How did pilots use them to effect or compensate for a flaw? To me, this naturally flows into Science Fiction. No matter what, or how much, technology is in a story, the stories are always about people. So the question becomes: if this story has some incredible technology, how do people use it, and how do they compensate for its flaws? Same questions, really. So progressing into a fascination for science fiction, and science & technology in general, was perfectly rational progression in my view.

Q.02 What were the best and worst things about writing the book?

The best thing was letting my imagination run free. I have written over one thousand pieces of flash fiction, and I love it, but the short form is very restrictive. While writing “The Huralon Incident,” I could suddenly say what I wanted and length (well more so than before anyway). I could finally write about concepts and ideas that had been bouncing around in my head for years, but could never fully express. The worst thing was, “killing your babies.” It’s important to keep the narrative moving at all times and that meant many of the little asides and tangents that I loved had to be removed. My book easily only represents one third or less of all the writing that went into it. It hurts sometimes but then again, no pain, no gain, right? I think the book is better for it.

Q.03 What fast food is your favourite and why?

I love this question! My favorite fast-food, easily findable anywhere in the US, is Arby’s. It’s best with a little pickle and onion and dripping with Arby’s sauce. But here in Austin, the fast food I crave the most comes from Hummus Cuisine. It’s a food trailer. In Austin, some of the most imaginative, progressive food ideas come from food trucks (we’re weird here in Austin and proud of it). Hummus Cuisine is run by a Lebanese couple, and they treat me like family every time I go there. Their gyros plate is absolutely to die for. Their tabouli and hummus is all hand-made and it’s wonderful. There’s no other flavor palette quite like it, and I adore it. Shawarma, which is also available there, even features in The Huralon Incident.

E.A. Wicklund served in the US Navy, as an Operations Specialist aboard several surface warships and is now an IT Consultant living in Austin, Texas with his beautiful wife, Shey, and daughter Hannah. He got hooked on books at a very early age and by twelve had read every Jack London book he could find. His father, a military officer working in Naval Intelligence introduced him to military history books and he swiftly worked his way through the entire collection. When other kids were reading Spiderman comics, he read about the Battle of Leyte Gulf and the greatest naval clash in military history. But when it comes to fiction, Science Fiction is his first love.

You can find him on Goodreads or his humorous flash fiction blog.