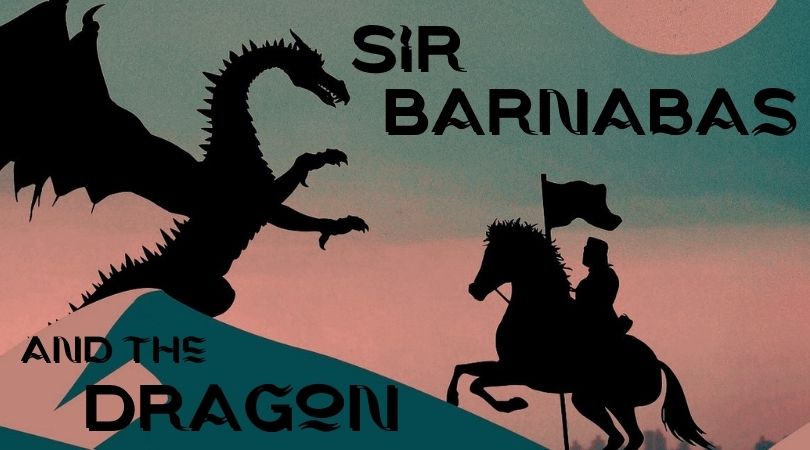 The tale of a bold knight, a valiant steed, an innocent maiden and a cunning dragon…

The maiden wasted little time in considering her options. “Although I’m firmly of the opinion you lot are hallucinations brought on by fear on the off chance you aren’t, I’d suggest the young man comes down here and does something aside from waving his sword around.”
Salazar swallowed his surprise and kicked Barney firmly. “You’d better turn around, sir knight. Your fair lady awaits. And it doesn’t sound to me like she is accustomed to waiting.”
Barney turned and looked ruefully down at the girl. “I’m really sorry about this, Princess .”
Aurora offered him a sunny smile, which awoke a dimple in her left cheek.
Judging it politic to leave the humans to their own devices, the big horse turned his back while Cicero made an enclosure of his wings. Finding the sounds of sliding cloth and murmured comment a bit distracting, he turned his attention to Cicero who was looking pinched, and uncomfortable, and disapproving.
“I don’t know what I imagined,” he said thinly, “but that young female person just giggled.”
“Sir Barnabas has a bit of an effect on females. We’re only here because The Queen’s Majesty has designs on his virtue. He’s not interested – because even if she wasn’t married she’s scarcely a catch. So we bravely ran away.”
“You ran from a female?”
“No. We ran from her mad bastard of a husband. He’s about eight feet tall, built like a wyvern, and completely mental. He’s never lost a tournament, or a duel, or a battle in his life. And he is said to have killed ten dragons.”
Cicero winced. “Oh. Right. One of them. I’ve read about that sort of a king.”
They were quiet for a few moments, then Cicero spoke pettishly.
“Do you think those two will be much longer about their business? This is beyond embarrassing.”
Salazar was casting about in his head for something anodyne to say when the giggles and murmurs were interrupted by a sharp cry. He opened his mouth to say something about the job mostly being done when the ground beneath his hooves began to tremble. He looked to the north, where the lush meadowland gave way to scrubby moorland.
“Oh no. By the hairs on my granddam’s fetlocks please let my eyes be deceiving me.”
But they weren’t. It looked as if Nemesis, in the shape of a mad half-giant and his equally deranged horse, was galloping towards them bellowing imprecations.
“Is that?” even Cicero sounded impressed.
“Yup. That’s his mad-jesty.” Salazar raised his voice. “Hopefully you two have done the needful, because it’s time we weren’t here.”
Barney stood up and his companion straightened her skirts before standing beside him. Cicero dropped his wing and they both stared open-mouthed at the nightmarish vision that was The King’s Royal Majesty in a killing rage.
“Avaunt ye foul fiend,” he bellowed and the spittle flew from his lips. “Prepare to meet thy doom.” His barbed lance rested on his right boot and he swung a battle axe of about a man height negligently in his other hand.
“I thought my brother was a mad bastard,” the Princess murmured. “What happens now?”
“Now, hopefully, we get the hell out of here.”
“Grasp my foreleg,” Cicero commanded.
Barney and the Princess did what they were told, and the dragon took a firm grip of Salazar’s bridle. He sent a gout of flame towards the approaching madman before touching his snout to the rock and muttering a word in dragonish.
Came a flash of something beyond lightning, the western sky turned as black as tar, and the Dragon Rock split from top to base falling in two halves on the cold grass. The king’s gigantic horse stopped galloping, and his mighty hooves cut deep channels in the moorland peat. His royal rider had all he could do to keep his seat in the face of this sudden cessation of movement even though he dropped his weapons, and groped for the reins. By the time he had collected his wits and his shredded dignity the dragon and its companions were nowhere to be seen.
“Come out and face me you lily-livered lizard. Ye can’t hide forever,” he bawled as he rode around the ruins of the only true Dragon Rock in his kingdom. “Coward,” he roared into the darkening sky. “Cowardly son of a cowardly father.”
For a brief second there was a tear in the storm clouds that were rolling in from the west and a blunt saurian face smirked at him before blowing a single blue flame in his direction.
The dragon disappeared again, and as the king’s beard burned merrily a disembodied voice spoke from the sky.
“Game over.”

There will be a new serial for you to enjoy next Sunday!

One thought on “Sir Barnabas and the Dragon – Eight”