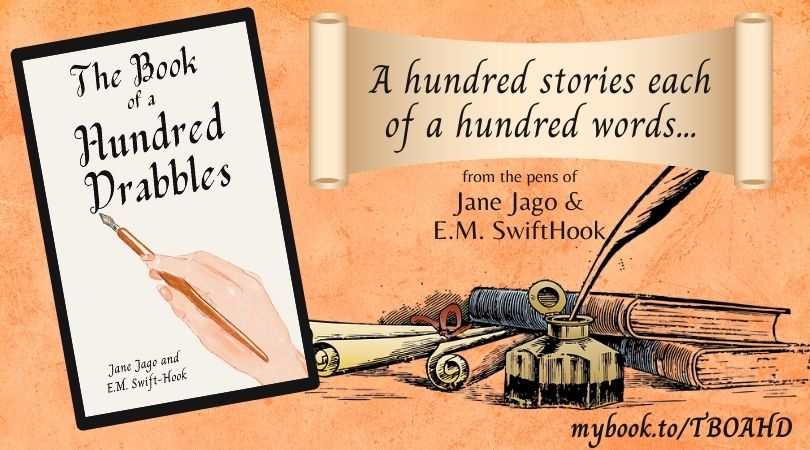 A hundred stories of a hundred words from the combined quills of Jane Jago and E.M. Swift-Hook.

What’s In A Name?

Rex had been through several homes so he had no great expectations when he was chosen at the pound that this one would be any different. The woman who had stared at him in his run with an intense look and had not seemed that pleased to take him. She wore hard heels that tapped along the floor and didn’t say anything as she put him into the car and drove home.
The man who sat alone in the garden looked very sad, until he saw Rex. Then he smiled.
“Charlie? My Charlie!”
Rex decided he liked his new name.

Sick as a Human

It was a breathlessly hot day, and the feral dogs were mostly gathered in the shade of an olive grove. Big Denzil watched his mate pick her way between the sleeping forms. He greeted her.
“Do you walk well, mother of my pups?”
“I do,” then she flattened her ears to indicate amusement. “One’s eldest male pup is feeling less well though.”
“Tell on, my beloved.”
“He and Three-Toes found a dead fish down by the cistern. A long dead fish. Three-Toes’ dam warned them.”
“But they knew better?”
“They did. And they were as sick as humans…”