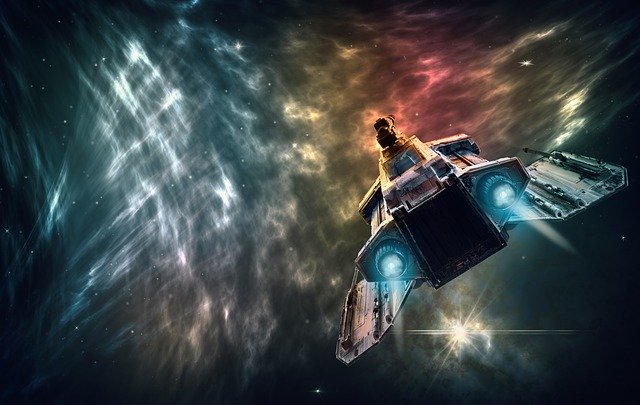 Hengist’Dog’Gethick is one of the stars of the science-fiction show Starways Pathfinders.

Dog was half drunk and wondering if he should have accepted the invitation to join his best friend in the dive bar on thirty-three. Teram was the kind who liked to go slumming — said it kept him grounded. He ran the family salvage company and was the hands-on type who liked to do the work at the sharp end. His idea of a good night out was to go drinking with his hard-core salvage crews.
“They are good people, Dog — and they would be made up to meet you.”
“No. They would be made up to meet Sub-Commander Arlan Stude, not Dog Gethick, jobbing actor.”
Teram did not deny it, just rolled his shoulders as they took the glides down.
“They won’t recognise you anyway without that uniform and the sexy half-mask,” he confided. “But you got to know what you are to these boys. They won’t miss an episode. You are like their hero.”
Dog shook his head and altered course to avoid his towering bulk blocking the way for a couple with a baby.
“It’s all crap. Just kids’ stories in grown-up words. None of it real. Not like it’ll ever happen. I don’t see the real Strands ever funding a space exploration mission. They’d not see profit in it.”
Teram glanced up at him.
“You don’t get it do you, Dog? It’s not that it’ll never happen — everyone knows it’ll never happen. It’s that it shows something bigger than this.” He gestured to the buzz of humanity around them. “These are people penned into the cage this city’s become — you, your show, it opens the doors of that cage for a while. Opens the doors and lets in hope. More than hope. Real belief in a future that can be more than this.”
That was too much, and Dog shook his head. “I’m an actor, not a fucking messiah.”

The bar was not as bad as Dog had thought it would be. It was well ventilated and the people who were vaping whatever noxious substances sat in a side room where an androgyne gyrated naked on a podium. Teram’s crew sat together by the one window which offered not so much a panorama of the cityscape of the kind Dog had at home, but more like a murky glimpse into the bowels of the world — dark and lit by sudden flares.
“So, what do you do, Dog?”
Someone had to ask, and lulled by the strong spirits and the rough but good-natured bonhomie, Dog almost forgot himself.
“I’m an actor.” He remembered in time and quickly added, “Used to do that commercial for Eatin’ Quix delivery?”
That met with a few nods of recall and the topic moved on. But it was too much to expect Teram to let it lie for long.
“So, what did you guys make of the latest SP? You think they will find those Kyruku?” His eyes slid to Dog and he winked. “Makes you think. Aliens and all.”
Dog said nothing as the men around him speculated. “Ain’t no fucking aliens. If there were, we’d have met ’em by now. Stands to reason.”
“Yeah. But The Golden Strand is headed ’cross the fucking galaxy, not just round the block and home; it’s different.”
“Different? You see that view screen they get to see stuff on? Huge thing. Dream of that for our ship. What you say, boss — when we getting that kind of tech?”
There was laughter, and Teram laughed loudest of all.
“What if it was for real, though?” someone said. Dog had not picked up the names; he’d tried, but the faces were too similar — worn, weary and bleak. He recalled an odd conversation he’d had with Heila a couple of days before: she’d been going on about her fans, her people. Well, he guessed these were his people. Gnarled by life before they hit thirty, running on dreams and stardust and the false hope held out by the allure of each episode of Starways Pathfinders.
“What if? You kidding? I’d sign up in a second.”
“Yeah. Think of it. The freedom of the stars. Going where no other fucker’s ever been.”
“Be like, you’d be alive. You’d matter. You’d be doing something — something good.”
Heads nodded and someone called another round of drinks. Dog stared out of the window at the inky sludge that coated it, dulling the grim sights it would otherwise expose.

This is an extract from ‘Star Dust’ by E.M. Swift-Hook, originally published in The Last City.