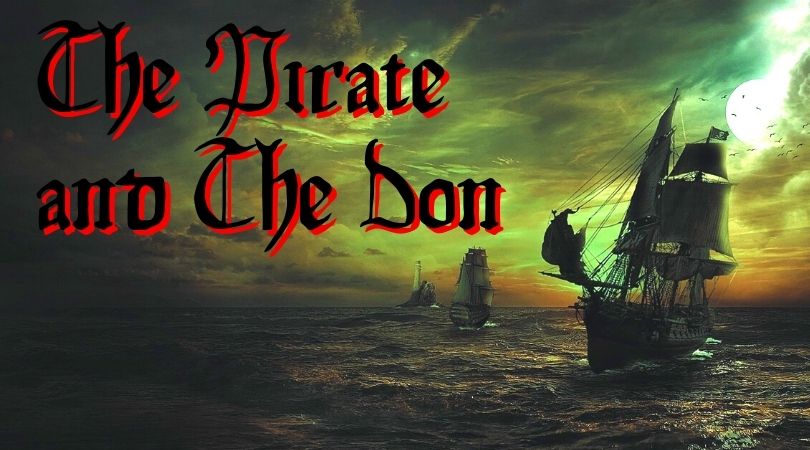 A brutal fantasy tale of piracy, friendship, romance and revenge on the high seas…

The sun was heading for the western horizon and Tall Jack Stainless awaited his opponent with grimly amused patience. He stood at the western corner of a hastily roped-off arena made of stamped down sand. Two copper-skinned pirates all but dragged Don Esteban into the ‘ring’. The Spaniard’s eyes darted about him and Jack was pretty sure he was hunting for a means of escape. With no exits immediately available, Esteban seemed to reach a decision. He stood taller and straightened his shoulders.
The crowd of witnesses pressed forward and Jack whistled sharply. Somebody in the crowd threw a sword and dagger, which landed point down in the tight-packed sand about a foot in front of Esteban. He bent, snake-swift, and came up with the sword in his left hand and the dagger in his right. Jack didn’t move. He just allowed a slow smile to spread across his face.
“Where’d you get the bruise pretty boy? Been playing with the big kids have we?”
“Keep taunting me, dwarf, and we’ll see how long it takes you to die with a dagger buried in your gut.”
As he spoke, the Spaniard was sidestepping slowly, and when he adjudged himself perfectly positioned he tossed his dagger into the air – catching it by the tip and throwing in one seamless movement. It was a good throw. Only Jack had read the move and he wasn’t where the knife landed. With a swift move of his own he picked up the thrown dagger from the sand and shoved it in his belt.
“One down,” he said mildly. “Your move, pretty boy.”
Esteban stared at him, unable to believe that his thrown knife hadn’t so much as nicked the skin of the short, broad-faced half-man who he held responsible for the death of his brother.
It was as if the deformed creature read his mind because it laughed harshly.
“Oh yes, pretty boy. I shot your brother. Right between his lying eyes. He was screaming at the time and the noise annoyed me.”
This was too close to home and the blood rushed to Esteban’s head. He determined to end it there and then and rushed towards his opponent screaming wordlessly, and swinging and slashing with his sword.
Jack simply sidestepped.
“Missed.”
His obvious amusement flicked some sort of switch In Esteban’s head and he went completely berserk. Forgetting his sword he rushed at Jack with his hands clawed and his teeth bared.
“I will bite out your throat,” he grated, “and after I have fed on your blood I will take the woman and sell her to the worst whorehouse in Tashkent.”
Jack didn’t even bother to sidestep this time. He simply ran the madman through. Even on his knees with his lifeblood staining the white sand Esteban continued his litany of hate. Jack listened for a brief moment before stepping up behind the dying man and cutting his throat. The curses stopped. And Don Esteban de Herrera y Corrado died on a coral atoll a thousand miles from his home in the vineyards of Spain.
Jack cleaned his sword and knife oh the dead man’s salt-stained clothing and then walked into Mary’s waiting arms.

There will be a new Sunday Serial here on the Working Title Blog next week!