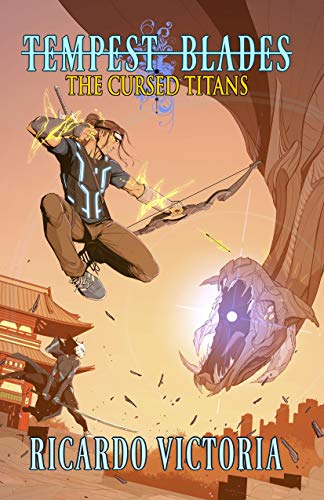 The Cursed Titans is the second book in the Tempest Blade series by Ricardo Victoria.

The triennial Chivalry Games have returned!
After helping to destroy the Withered King, Alex and the rest of the group find out that saving the world has consequences. While he is secretly battling with depression and with the Alliance on the verge of collapse, a diplomatic summit and the Chivalry Games—to be held in the far off Kuni Empire—may give everyone the opportunity to turn things around. Alex builds a team to represent the Foundation in the Games, facing off against the best fighters in the world. When an ancient being tries to raise legendary nightmares known as Titans using the peace talks as a trap, Alex has to find a way to save everyone before it is too late. Alex must learn that he is not truly alone to save the world from the chaos of the Titans. In a world where magic and science intermingle, anything is possible.

Alex jumped from the third floor of the parking lot, using the Gift to slow the fall, and landed on top of the van, leaving a large dent. The noise startled the robbers, who stopped what they were doing, dropping the stolen boxes from the comic book shop.
“Who are you?” one of the robbers asked, startled.
“A hero who rises to beat the crap out of criminals like you,” Alex stood up, pointing at the man.
“Is this guy for real?” a second robber asked the first.
“A movie by Silver Harvest,” Alex continued narrating. “Soon in theatres.”
“Where did you came from?” a third robber asked.
“I can tell you, it wasn’t from that sewer,” Alex looked at his opponents, four grown, burly men in ski masks. One was carrying a bat. He smiled. There was no need for him to draw Yaha or even his bow. He wanted to win, but in a fair fight. And he didn’t want to kill them, just hurt them some.
“Since you don’t seem to be carrying heat, I will go easy on you.”
Alex jumped from the van’s rooftop with a double kick, hitting the two closest robbers in the face. He landed with ease, standing in a combat guard position, left hand and leg in front, leading, right hand and leg back. Both hands in a fist. A third robber ran towards Alex, trying to hit him with the bat. Alex pivoted slightly and caught the bat with his left hand. He took a moment to see the brand and the signature on the bat.
“A Pepe Cansino bat? Tell me you didn’t pay money for this,” Alex broke the bat with ease and punched the robber in the face with his right hand. “No, I’m pretty sure you stole it because no one would pay money for this shit.”
Alex then threw the broken half of the bat he was holding into the head of one of the robbers he had kicked, knocking him down once more. The three remaining robbers attacked all at once. Alex blocked the attacks to his left and right with both forearms, and then jumped to kick the one in the middle in the face, breaking his nose. The robber to his right charged once more at Alex, who received him with a strong kick to the stomach. The impact made the man throw up. Alex then proceeded to punch the robber to his left with a right hook straight into the union between the jaw and the skull. A crunching noise was heard.
“Sorry ‘bout that. I guess you will have to eat through a straw the next few months,” Alex said as he stood in the middle of four large adults knocked out cold, lying on the ground.
A few whimpers echoed in the parking lot. He heard a click and he sensed a small explosion of energy. Alex barely had time to dodge the bullet, leaning to his right. The projectile impacted on the van behind him. A fifth robber, who had come out from the back door of the shop looked startled, and his shaking hand pressed the trigger three more times.
Alex tried something very, very stupid and risky. Focusing the Gift, he reached with his mind to the electromagnetic field that emanated from his body when he was ‘on’. The same energy that fed his vest. Extending his hands, he directed the electromagnetic field to make it stronger in front of him. It felt like trying to push water. The more he pushed, the more resistance the field offered. But the small amount Alex managed to nudge it was more than enough, as it deflected the bullets away from him.

A Bite of… Ricardo Victoria

What have you most enjoyed about revisiting the world of Tempest Blades?

It was awesome. It was like making a trip to a new place with an old friend. It allowed me to work through some personal issues while having a new adventure. As well it allowed me to explore and expand upon the world of Theia and share more of it with the readers. There is so much to share and not everything made it into the book. I hope I can keep revisiting and exploring every corner of it. Also, seeing how the character have changed after their first adventure together, adding new members to the group made it feel like watching someone growing up.

Why does the anime style of fantasy hold such appeal for you?

I grew up watching cartoons and anime, so I like the idea of freedom it allows by mixing different, sometimes apparently contradictory concepts and make it work. The story becomes more about the characters and less about a rigid group of tropes. Anything can happen and that’s liberating as writer. I also enjoy the action packed, cinematic feeling it has, which contrasts nicely with the more heartfelt or dramatic scenes.

If you could give one piece of advice to your younger self as a writer, what would it be?

Be patient, write for the fun of it and don’t let writing absorb you so much that you forget about taking care of other aspects of your personal life. For you writing is therapy, not a job.

A glimpse into the mind of eccentric, toy addicted genius Ricardo Victoria…

Born in the previously frozen landscape of Toluca, Mexico, Ricardo dreamed of being a writer. But needing a job that could pay the rent while writing, he studied Industrial Design and later obtained a PhD in Sustainable Design, while living in the United Kingdom. There, he did a few things besides burning the midnight oil to get his degree:
-Trained in archery near Nottingham
-Worked in a comic book store to pay for his board game & toy addiction
He is back now in Toluca, living with his wife and his three dogs where he works as an academic at the local university. has short stories featured in anthologies by Inklings Press and Rivenstone Press. He was nominated for a Sidewise Award 2016 for the short story Twilight of the Mesozoic Moon, co-written with his arch-nemesis, Brent A. Harris. You can reach Ricardo on Twitter or on his own website/blog or via email: scifantastique@gmail.com

One thought on “Author Feature: Tempest Blades The Cursed Titans by Ricardo Victoria”