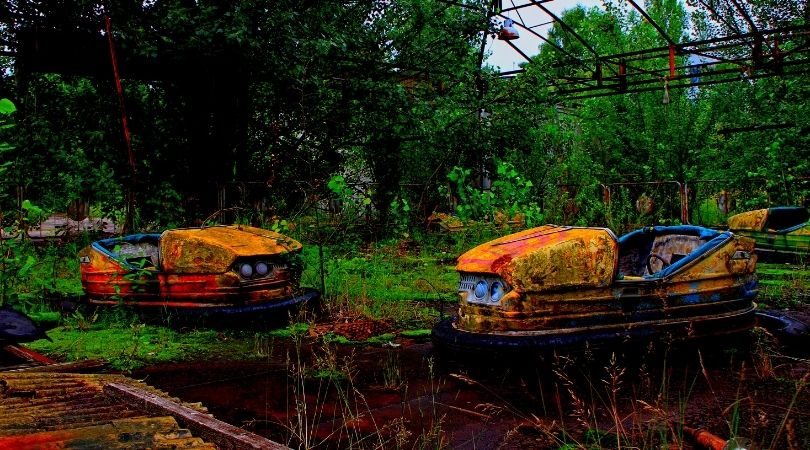 A sign hung down, still half attached to the top of the pay-booth, its broken back clapping against the heavy door set in the side of the small brick cabin. The words were barely visible:

Somewhere an owl shrieked and, despite herself, Jess drew a sharp breath. She took a step towards the broken, flapping sign and played the torch beam over it from end to end:

The owl screeched again and Jess smiled. You had to love it when the atmospherics played up to the occasion. It would only take a sea mist rolling in to turn this place into something out of an old-school Hammer Horror production. The really chilling thing was not any kind of supernatural danger here, it was the realisation that this was indeed an abandoned and empty place, with no one around who might have a phone she could use to call the roadside recovery and this place was a very long walk from anywhere. Only a year ago that would have meant very little. She might even have enjoyed the bracing breeze and the countryside at night. But not now. Now she would not make it more than a mile before she was crippled with pain.
The laughter carried on the night air, coming from behind the low roofed building immediately in front of her. At a guess it had once been some kind of cafe, but now it was heavily boarded up, metal shutters pulled over the windows, like a creature retreated into its shell.
Shelley’s Funpark? Why did that sound so familiar? Jess would have given it some more thought but the laughter came again, masculine, plural and loud. It was not from someone with any thought of trying to avoid attention. Still gripping the magnalight, its beam dimmed, Jessica made her way past the cafe-building and into the open area beyond.
The shadowy figures moving vaguely on the far side, close by the enclosing wall, sprang suddenly into stark relief and were revealed, as as an orange glow flared behind them. Jess froze, hearing drunken cheers as the fire took hold and watched as, like the ritual of some strange coven of witches, the group of youths all started throwing things into the flames.
She sensed this was indeed a ritual, though not one of any religious kind. Things were passing hand to hand, bottles of water and white cider. It was a scene she had witnessed a few too many times in her career. In her previous career, she mentally corrected and felt the small inner lurch of loss that always left in its wake.
Then someone moved right behind her and a pair of hands gripped her shoulders.
“Hey bros, look what I just found.”
What doesn’t kill you makes you stronger.
No. It doesn’t.
It really doesn’t.
Not when it breaks you inside.
That was all Jess could think, standing, paralysed by her past. There was not even a conscious sense of fear, though she could feel her heart rate slam up and the floor drop away. It was as if her conscious mind had shot out of her body and hung suspended, mid-air, above it. There was nothing she could do. It was going to happen again.
The yelp seemed to come from a great distance away not from right behind, but the moment the grip was gone from her shoulders, it was as if she were restored. Restored to a body in panic. She would have run blindly, but there was a gentle touch on her arm and a girl’s face, looking at her. They ran together.
Jess had no idea where they were going, past half demolished buildings, and broken metal structures that reared like scaffold dinosaurs, against the moon-lit sky. The ‘bros’ were either more worried about what had happened to their companion or already too out of it to be able to give chase, because after a few shouts and some sounds of running feet, the night closed behind the two of them into quiet.
They went past the barrier with an old height restriction sign on it and cartoon-like pictures of stick men standing up in cars on a roller coaster, or leaning out, circled in red with a bar through the image.Then they were clambering over a heap of twisted metal beyond. It was not a hard scramble the way her guide was going, or a long one, which was as well because the shooting pains had started up in her legs as they reached what looked a bit like a metal box, buried in the middle of the debris.
The girl touched her hand again, then opened the door making some kind of sounds, as if reassuring an animal. Then a small glow of light came from inside and Jess went in.
She was not really sure what she had expected. But not this. It was almost obsessively neat and very clean. For a moment, Jess was thinking of paisley furniture and over-polished wooden floors, then chastised herself for assuming that the homeless could not also be house proud. For that was clearly what this was, a homeless person’s private shelter. There was a counter top along two sides and a closed fire on the third wall opposite a comfortable bed. It was more of a sleeping platform really, covered in an odd variety of multicoloured fleece picnic blankets. Two very large cats were curled in the middle and watched her with wary feline eyes.
Jess took it in then looked at her rescuer. The girl looked to be in her mid-teens, a runaway maybe. That realisation pushed Jess out of her bubble of self-concern and she mustered a smile.
“Thank you, I don’t know what would have happened if you hadn’t been there,” she said. The girl said nothing, just glancing briefly to the cats and then back to Jess. So she tried again:
“My name is Jessica Monday, what’s yours?”
The girl kept looking at her, but the silence went on.

From ‘Maybe’ by Jane Jago and E.M. Swift-Hook.