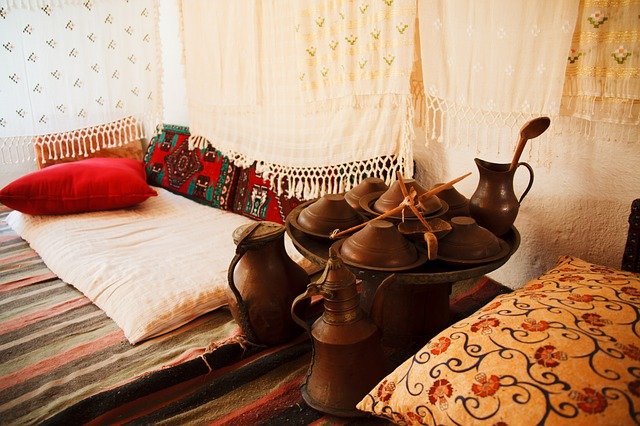 Caer made a gesture of dismissal to the Zoukai and slid from his mount. He ignored the undisguised envious glances he got from the men as they drifted off to whatever duties or pleasures awaited them in the camp. They could not know that every meeting he had with the Caravansi was more of an ordeal than a delight. Steeling himself inwardly, Caer crossed over to the pavilion and went inside. As the flap fell closed behind him, he felt as if he had entered a different world.
It was not as rich as many pavilions Caer had seen during his years on the road, but everything within it was exquisite and of the finest taste, culled from the choicest wares of every market on the Western continent and even some from beyond. Soft fleeces and felt rugs had been laid over the ground, some embroidered with intricate and exotic designs. Woven hangings looped from the canvas roof, filtering the thin sunlight to a jewel-rich glow. Suspended from the ridge poles were two delicately carved incense burners, which perfumed the air with the sultry sweetness of precious quindria resin.
Then he saw her and his breath caught in his throat. She was reclining upon a couch of furs, her long limbs at ease and a glimpse of their smooth skin visible where the fabric of her expensive robe was arranged to allow it. A young girl was serving her with wine and once she had taken a goblet for herself, she sent the girl to serve one to Caer as he rose from his kneeling bow.
“Sit,” she told him, gesturing to the place at her feet. “We have something important to discuss, Captain.”
“Your will, Honoured One.”
Caer settled himself uneasily on the rugs before the couch. The wine he declined. It was difficult enough for him to concentrate on business simply from being under the influence of the intoxicating beauty of the woman who employed him. This close to her, his usual confidence seemed to fail and left him suddenly uncertain of what he should do or say. He tried to tell himself this was because he had been in her employ for just nine days and during that time had not spoken with her beyond the most basic formalities needed to organise the caravan. But somehow he suspected he would still feel the same way after ninety days or nine hundred.
It did not help that as Alexa sipped at her wine, she was watching him with an intensity of focus that left Caer with the uneasy impression she could read his thoughts.

From The Fated Sky the first part of Transgressor Trilogy, and the first book in Fortunes Fools by E.M. Swift-Hook.