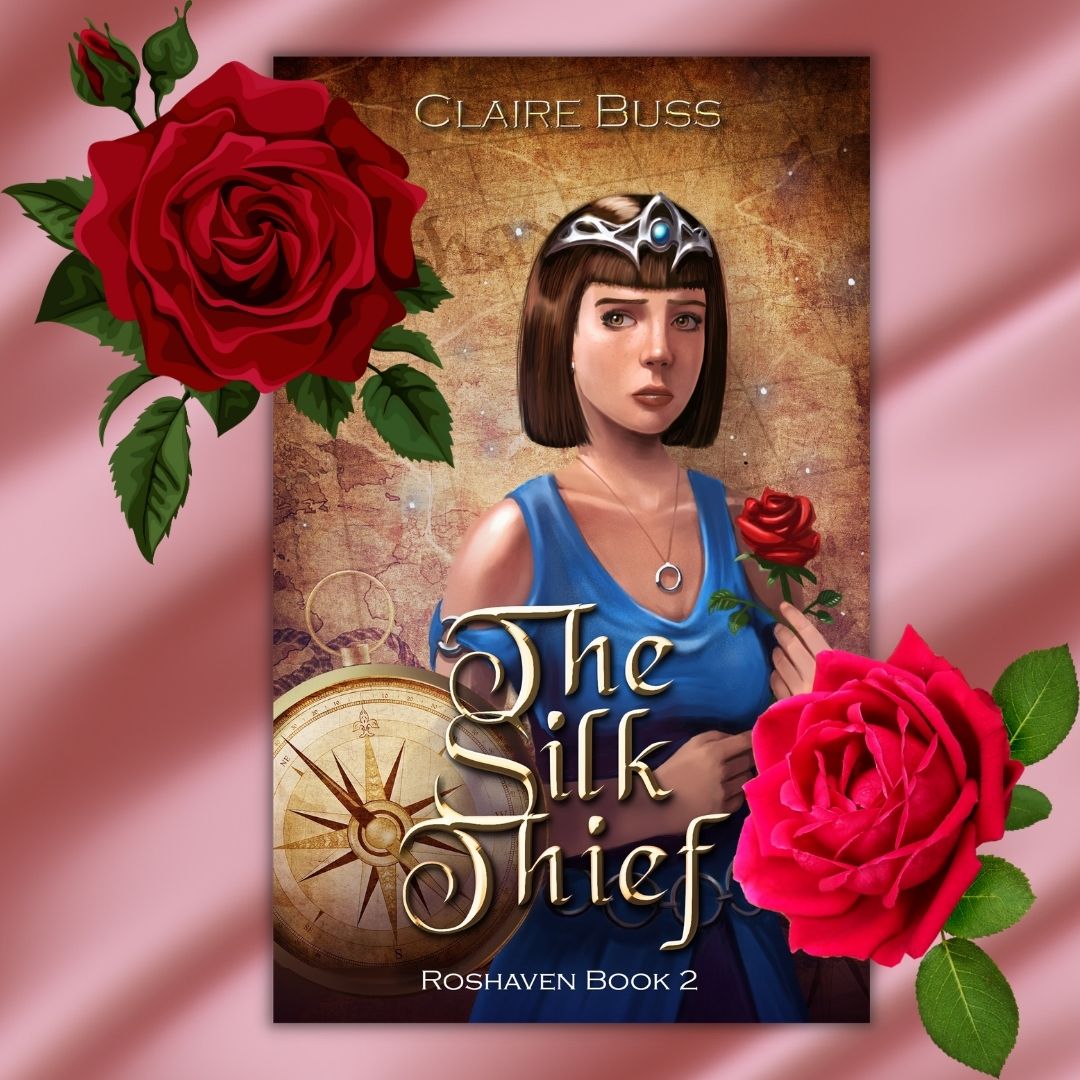 The Silk Thief, by Claire Buss, is the second full length novel in the Roshaven series.

It was Griff’s funeral. Ned Spinks, Roshaven’s Chief Thief-Catcher, watched from his elevated vantage point on the upper part of the shore as the crowd congregated by the water. He scanned the throng for any suspicious behaviour. A cool sea breeze carried some freshness his way, combating the aroma caused when you get lots of individuals gathering in one place. It gave him small comfort to see such a large turnout, his own grief was too raw.
‘Yor not on the clock now, Boss,’ Jenni the sprite remarked as she nodded a greeting at the Gingerbread folk. Wary of the water, they stood as far from the damaging liquid as they could without removing themselves from the ceremony.
‘Yeah, well, you know, people,’ muttered Ned.
‘Fourteen’s over there.’
Jenni pointed and they both stared at the elegant Imperial gazebo erected upon the Dead Pier. This was the other reason such a great crowd had assembled, and why the air hummed with animated chatter and gossip. The Emperor of Roshaven had recently revealed she was a woman, and this was her first formal event since that announcement. Unfortunate that it was a state funeral.
‘Mhm.’ Ned’s reply was as nonchalant as he could make it. He hadn’t seen Fourteen since they returned from their quest to save love and defeat the Rose Thief. After their triumphant return to the city, Fourteen had been immediately swept up by her administrators, the High Left and High Right. Every time Ned tried to get in to see her, the Highs cited important imperial duties that couldn’t be disturbed. After several tries, Ned had resolved to leave it for a while. He wasn’t certain if it were the Highs or Fourteen that were keeping him away.
‘Sparkly dress,’ commented Jenni.
Ned knew she was trying to get a response from him and his gaze flicked over again to where Fourteen stood, slightly apart from her retinue. Her short black hair framed her face and her silver gown was shining in the sun.
It relieved him when the opportunity came to change the subject as Momma K, Queen of the Fae, glided past bestowing regal smiles upon individual members of the crowd. Ned noticed he didn’t receive one and Jenni had ignored hers.
‘Things not going smoothly at home?’ Ned inquired. Jenni was the eldest of Momma K’s children, but she stayed with him in the city more often than not.
‘S’complicated.’ She was looking over at people on the pier again. ‘Who’s that talking to Norris?’
Ned decided not to push it, families were complicated, and his was no exception. Despite himself, he glanced over again at the dignitaries assembled on the pier. Fourteen was busy greeting some bureaucrat or other. There were representatives from all of Roshaven’s trade partners and a few cities they had not yet connected with. He could make out Fat Norris, otherwise known as the Lower Circle, whose responsibility it was to maintain existing trade agreements and keep them running smoothly while working on establishing new ones. He was talking to a familiar looking man, dressed in blue. Ned squinted and then stiffened.
‘It’s Theo.’

The Silk Thief will be released on 4 June but is available for pre–order right now!

A Bite of… Claire Buss

Q1. What do you love most about writing the Roshaven books?
I enjoy letting my imagination go wild but really, it’s the characters in my head telling me what to write. Every time I sit down, I have no idea what’s going to happen next or what kink they’re going to throw into the storyline. It’s why I don’t do a great deal of pre-planning. I am most definitely a discovery writer. The characters are such fun, one day I will have time to write down all the great backstories.

Q2. Have you considered doing any spin-off stories for one of the side characters and if you ever did which one would you most like to do?
You may remember that The Interspecies Poker Tournament is Roshaven Case File 27 which means there will be a further 26 novellas… potentially. I expect to have at least one per member of the thief-catcher team, an origin story if you like. And, of course, Fred. Who wouldn’t want to write a spin-off story about Fred, bless him. Ma Bowl might have a few juicy secrets too. Ooooh the possibilities!

Q3. If you were invited to tea with the Empress, what would you take as a present and why?
Cake. Rose likes cake only she rarely gets to indulge as it’s always sliced up for visitors and she’s usually so busy, she never gets chance to sit down with a nice cup of tea and a slice of cake. She needs more cake in her life.

Claire Buss is an award-winning multi-genre author and poet. She wanted to be Lois Lane when she grew up but work experience at her local paper was eye-opening. Instead, Claire went on to work in a variety of marketing and administrative roles for over a decade but never felt quite at home. An avid reader, baker and expert procrastinator Claire won second place in the Barking and Dagenham Pen to Print writing competition in 2015 with her debut novel, The Gaia Effect, setting her writing career in motion. You can follow her on Twitter, Facebook and her own website.