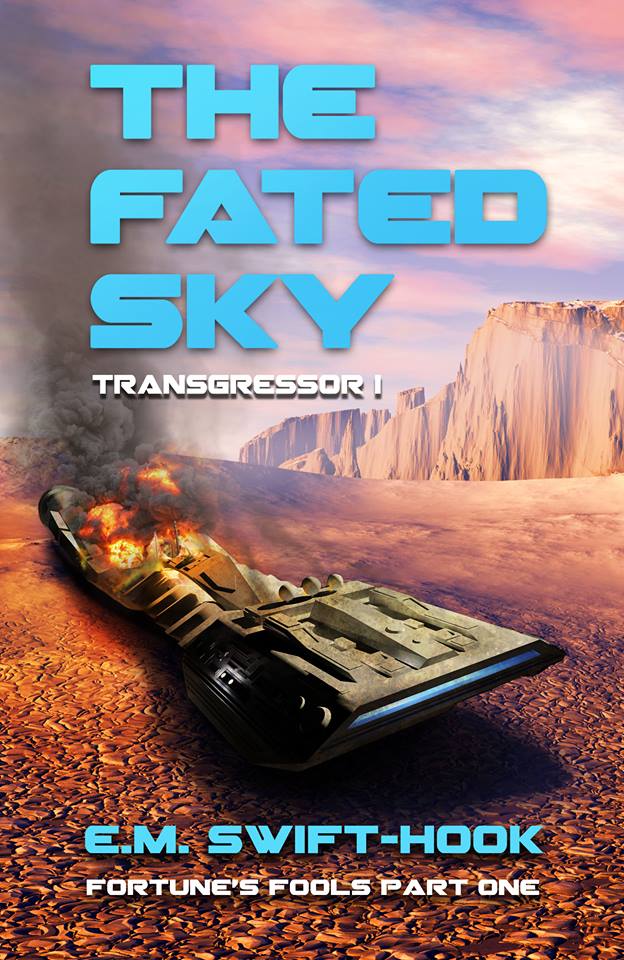 To celebrate the upcoming launch of A Necessary End, the final book in Fortunes Fools, The Fated Sky is free to download until 4 March

Caer sat on his pony looking at the dead body on the ground and wondering if he should send more scouts back towards the road, almost a day’s trek behind the caravan. This man had been alone, half-mad and no threat to the caravan, but others might even now be following the same path that they had taken from the road and for the same reason they had taken it: others who were scouts for brigands, bandits or bigger caravans than his own.
He spat in the dirt and narrowed his eyes as he looked past the file of wagons, ponies and people. It was late afternoon and his breath misted slightly in the air. The long cold winter was over, but in the barren Wastelands, spring was always slow to come. The air still carried a biting chill, even in the heat of the day and the distant peaks kept their mantle of snow and ice, tinged with crimson by the light of the huge red sun. Spring was having to claw its way free of winter’s greedy clutches so that Temsevar could bask in an all too brief season of warmth and growth.
The Wastelands were vast and magnificent. Here and there, standing proud and alone in the plain, like the lost sentinels of a forgotten age, were towering flat-topped mountains of rock, some so massive they were too big to cross in a day on foot. It was as though at some point in the distant past the ground had simply dropped away, leaving the high plateaux stranded above, like giant stepping stones, creating a two-tier terrain. If in the winter, these high grounds were the coldest and most exposed, in the spring they seemed always flushed with new vegetation before any managed to creep out of the more parched stones below.
Caer made his decision. With the work to be done, the four men he already had out scouting their back trail were all he could spare for the moment. He called to one of the mounted men who was riding with the caravan.
“Shevek, we are camping here.”
The man he spoke to wheeled his pony away and rode at a brisk pace towards the front of the train of wagons and animals, issuing sharp orders to make the night’s camp around the rocky debris beneath the steep cliff face of one of the high monoliths. Caer felt a familiar sense of satisfaction as those orders turned the straggling ranks of moving people, ponies and wagons into a brief flurry of chaos, before brightly coloured awnings, tents and pavilions sprung up from the chaos, like strange blossoms. Caer and his men rode through the quickly forming encampment, shouting instructions, solving problems, helping secure ropes and encouraging any who were slow to respond with the whips they carried curled in their belts.
In a remarkably short time, the caravan resembled a miniature town with streets and open spaces, stables, and pens. Fires were being kindled, children tending the animals as women kneaded dough and cut the vegetables for the evening meal. Toddlers screamed and got underfoot or rolled like puppies amongst the big, sharp-toothed dogs, which ignored them and begged for scraps with soulful eyes and then turned on each other snapping and snarling when an unsavoury morsel was cast their way.
Once the familiar routine was well established, Caer’s men guided their mounts towards the middle of the camp. The ponies’ short stubby ears, thick coats, wall-eyed glares and powerful necks, made them far from beautiful to look upon, but their split hooves could splay to grip surefooted even on snow and ice or could run fast on firmer ground. It was their broad backs which carried the burden of human traffic in both trade and war with a sturdy strength and agility which, for Caer, had a beauty all of its own.
The men who rode were as tough as their ponies. The older ones amongst them wore their hair long, stained red and tied back into a heavy braid, the greater length of the braid telling of ever greater age and experience. The youngest men had their hair shaved so close to the scalp as to seem bald. They were not even allowed to begin to grow a braid until they had served a year of apprenticeship with the caravans. All the men wore coats made from a brightly coloured heavy-felt cloth, over shirts with billowing sleeves, patterned skirted jerkins made from fleeced hides and plain felt britches which gathered loosely into calf-high boots. All were armed: every man wore a bandolier of wooden cartridge boxes over one shoulder and carried a crude pistol; one or two had a long-barrelled musket or rifled carbine, on their backs and each wore a long-bladed knife with an ornately carved hilt and whips hung looped at their belts.
These men were of the Zoukai, a brotherhood of warrior guardians, hiring themselves to protect the caravans which carried the trade of Temsevar. Named after the swift and ruthless, red-plumed predatory birds which hunted from the skies in these very wastes, they were bound by a strict code of honour which placed loyalty to their captain and their caravan above all else.

You can keep reading The Fated Sky which is free to download until 4 March. It is the first part of Transgressor Trilogy, and the first book in Fortunes Fools by E.M. Swift-Hook.

The cover is designed by Ian Bristow, you can find his work at Bristow Design.

One thought on “Coffee Break Read – The Fated Sky”