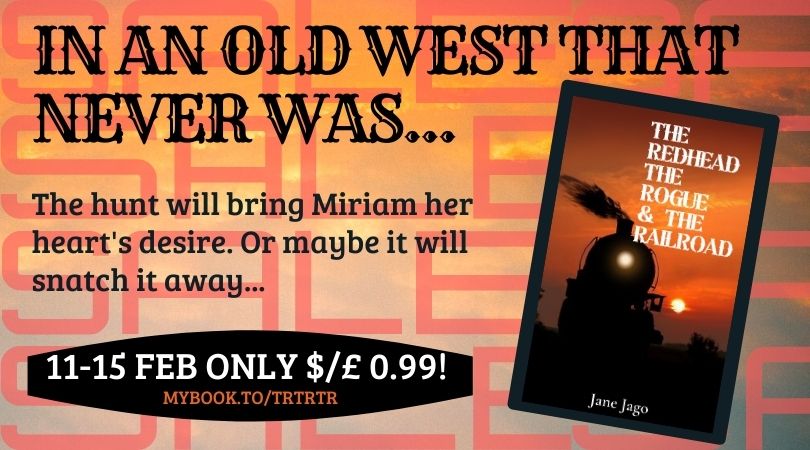 The railroad formed the first leg of the great trek to the rich lands beyond the desert, and it was rumoured that, long ago, the tracks ran from coast to coast. Nowadays, however, the railroad came to an abrupt end in a place of cattle yards, whorehouses, and bars. Hard-eyed women, and conscienceless men, preyed on the stream of humanity that poured out of the cross-continental trains as they puffed and wheezed to a halt alongside the ramshackle platform.
A dispirited-looking Church Army Band played hymns and waved collecting tins, more in hope than expectation. Behind them, a twice life size head of General Stonejaw Johnson, with his piercing eyes and pointing finger, adjured ‘upstanding young men’ and ‘modest females’ to join the Army in its fight against Shaitan and all his works. Which might have been ironic if any of the denizens of Trail End were of a mind to enjoy irony.
The Friday train came all the away from south-eastern ‘civilisation’, and its passengers had endured the swaying, clanking ride for the best part of ten days. Those who were in the first half dozen carriages fared better than their less affluent cousins in the rest of the train – whose accommodation more resembled cattle trucks than anything else.
When the train shuddered to a halt, the doors of the rear carriages burst open and a stream of humanity walked, crawled, or fell into the merciless light of the midday sun. They were converged upon by the whoremasters, slave drivers, and purveyors of dubious modes of transport who found it worth their while to endure the discomfort of a rail-end town in the name of profit.
The unsatisfactory daughters, disappointing sons, and con artists just ahead of the law, who occupied the front carriages exited the train in a rather more leisurely fashion, and most were met by family members, pre-appointed guides, or the representatives of the wagon masters retained to carry them west. There was a good deal of hand shaking and back slapping at this end of the platform, and while the sharks of every kidney circled each other a figure slipped quietly out of the train on the opposite side.
It was a slight scarlet-haired woman, dressed in functional leather boots and a khaki frock coat. She jumped lightly to the ground and reached back inside for a sturdy leather back pack. Adjusting the straps of the pack she pulled a pair of smoked goggles over her eyes and walked purposefully away from the crowds.
She crossed the goods yard and squatted down in the shadow of a ramshackle warehouse. Pulling the hood of her coat up to cover her flaming red hair she composed herself to wait. In time, the train was pulled away from the platform while its engine was laboriously turned around on an iron turntable powered by indentured labourers – humans being cheaper and more expendable than horses.
The woman sat, barely breathing and becoming less and less visible as the hours crawled past.  As far as she was able to ascertain only one person noticed her: a tall muscular stevedore with brown skin and eyes the colour of the desert sky. He nodded just once, before dropping an eyelid in a swift wink. She wondered if he might be her contact, but as thinking about it required more effort than she was prepared to expend with a long night ahead of her, she simply withdrew her mind from the surrounding area and sat motionless.

You can keep reading The Redhead, the Rogue and the Railroad by Jane Jago for only 0.99 between 11 and 15 February. Immerse yourself in a Wild West that never was…