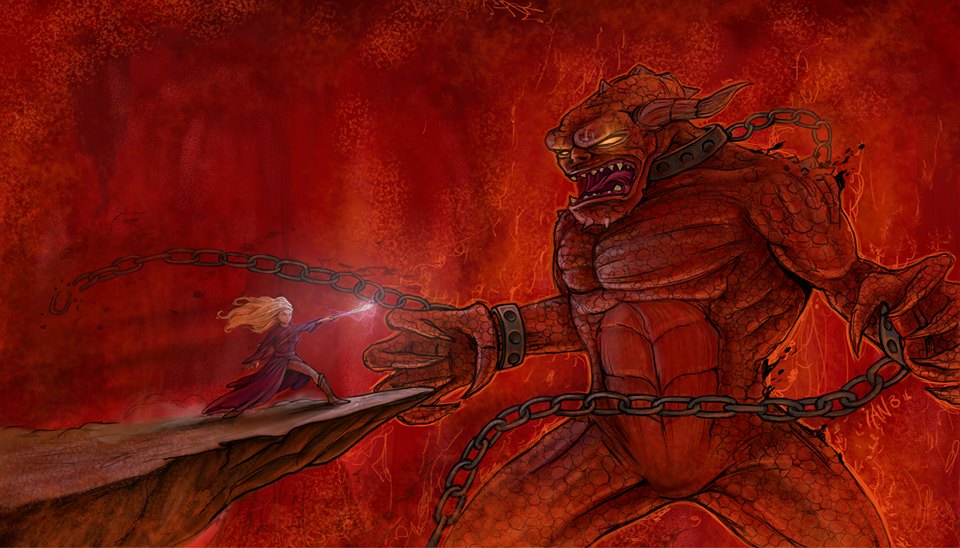 Writing inspired by the art of Ian Bristow

She felt the lure of the Flame, like a soft caress against the edges of consciousness – a promise unfulfilled. It called to her from the deep – a primal yearning to seek the fires below, the fires from which her very soul was wrought. Like a lover seeking the beloved, she yearned to be reunited with the source of her essence – the living flame that burned in the deeps.
Each time she woke she would rise and stand at the point where she could best feel the warmth on her skin. Eyes closed, the rising breeze from the chthonic conflagration, she would murmur a silent prayer to the Gods of Living Fire.
Each time she did so there would appear the form of a Guardian Avatar of Flame which would rebuke her for her audacity.
“What makes you think you are worthy?”
“Why should you be granted the Living Flame?”
“How can you believe you should even hope for such a thing?”
Each question would strike her like a blow, then the Guardian Avatar would vanish and she would be left to dream of ways to defeat it and reach the flame. The days and years wound past, each the reflection of the last and the foreshadowing of the one that followed.
The same yearning, the same questions.
Alone in her underground chamber, she would dwell on them. The weight of longing in her soul more of a burden than the heavy chains than restrained her and held her captive.

Ian is an awesome artist and cover designer, you can find his work at Bristow Design or watch him in action on ART with IAN