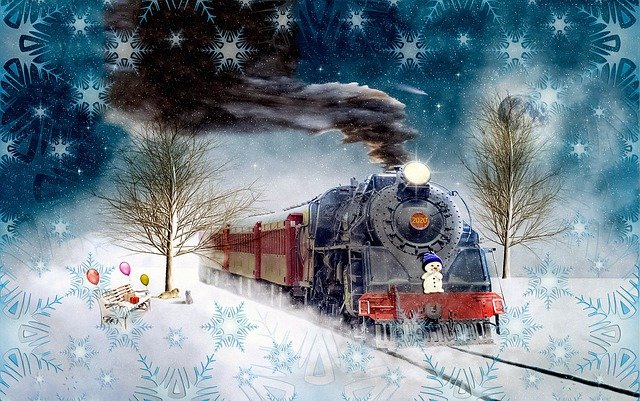 It was just past midnight, though the sky seemed extra dark
And all the little steam engines were gathered in the park
Then something broke the silence with a rattle and a creak
The oldest engine cleared his tubes, and he began to speak

“There are not many nights”, he said, “when we are gathered near
So I would tell a tale if you might have the will to hear”
The wheezing and the whistling was no louder than a breeze
And yet a tiny engine whispered, “Will you tell us please?”

“It happened very long ago, my father’s father’s story
When Owen Owen rode the rails to fame and shining glory
He was just an engine, and his livery quite worn
He pulled the ore from down the mine and worked from night to morn

But then one day in winter, he was give a big surprise
His driver and an engineer they fitted him with eyes
Clear and shining brass they were and bright to light the way
And driver said they made the mine as bright as any day

‘Owen Owen’, said the man, ‘I’ve come to ask your aid
I’ve toys to take to children but the reindeer are afraid
They cannot see through this thick murk and fear to break their legs
Will you help us out dear chap? Or do I have to beg?’

And Owen Owen smiled a smile as wide as wide could be
‘Open up the shed’ he said, ‘that’s just the job for me’
And so it came about upon that darkling winter’s night
That Owen Owen guided Santa with his eyes so bright.”

And every engine in the park gave a quiet beep
Before they closed their iron minds and tumbled back to sleep.