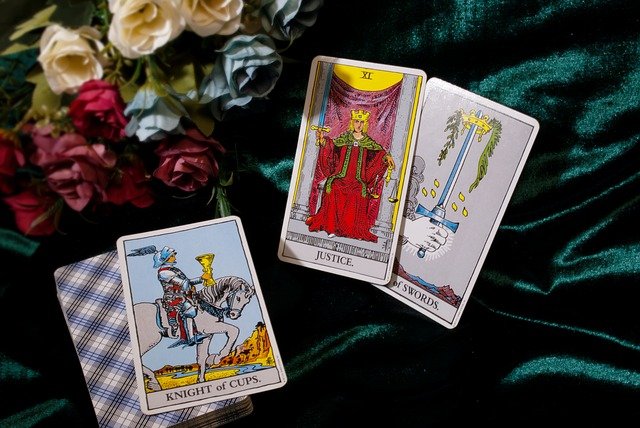 The moneylender was at the cottage early next morning, banging on the door and waking the inhabitants with cold curses.
“Where is she?” he demanded.
Donal didn’t pretend to misunderstand. “In her room. She begged the favour of one night alone. She hasn’t come out.”
“Fool.” The dark wizard felled the lazy thatcher with a blow of his staff. “Fool. She has flown. I awoke this morning to the sure knowledge she was gone.”
“She has nowhere to go.”
“It seems as if nowhere is preferable to either of us.”
Without awaiting invitation he shouldered his way into the cottage and up the narrow staircase. He kicked wide the door of the stillroom to see an open casement and an empty room. Cursing under his breath he was at the table where the tarot deck still lay in two strides. As he reached out his hand to dash the cards to the floor they seemed to crumple before him like leaves in the autumn wind. Only the card at the centre of the unfamiliar pattern remained intact.
The Queen of Swords stared at the dark wizard from a pair of calm green eyes…