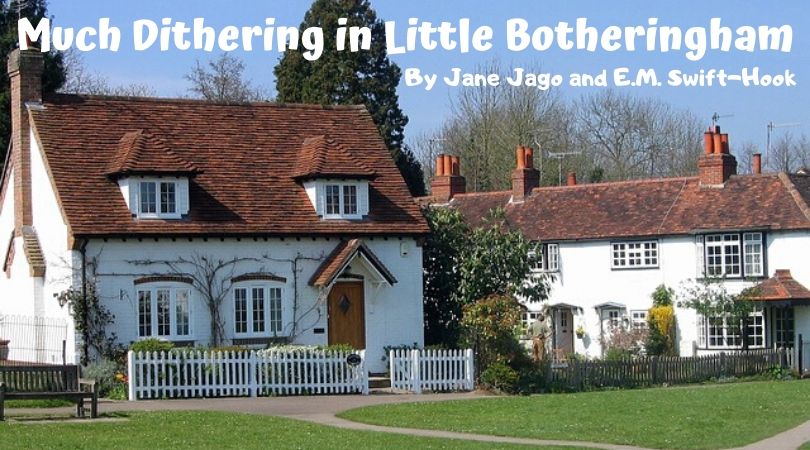 Em heard footsteps and Agnes grinned at her with the sort of evil anticipation that might have earned a clip across the earhole – if there had been time. But given the imminent appearance of their new seventh Em contented herself by snarking at her oldest friend.
When the door opened Em at least had the satisfaction of winning the private bet she had with herself about what Ginny would choose to wear.
“Come in and sit yourself down.”
She waved Ginny to a chair and Agnes sat opposite her. Em poured Bloody Marys for the three of them, keeping the glasses hidden from view while she added an unconventional ingredient to the one she put in front of Ginny.
“Bottoms up,” Agnes said cheerily, downing half her drink in one gulp.
Ginny Cropper seemed less keen, stirring the thick red mixture with its accompanying celery stick and looking about her with slightly narrowed eyes.
“Do you not care for Bloody Mary?” Em took a slug of her own drink and gave Ginny her least threatening stare.
Ginny stared back then seemed to reach some sort of a decision. “Oh well,” she muttered, “in for a penny.”
She all but upended the glass over her nose, draining every last drop before she crunched the celery.
“Seems to me that I’m being led someplace, and I find I don’t much care so long as somebody feeds me.”
Em went over to the Aga and took three plates of food out of the warming oven. The plates held large slices of tortilla with grilled tomatoes and mushrooms on the side. There was also a dish of bacon and a basket of warm rolls. The three of them set to with good appetites.
They had about cleared their plates, when Ginny broke the quiet with a tiny, genteel belch. “Oops. Sorry about that, but I think it’s been twenty years since I had anything other than granola and almond milk for breakfast.” She rubbed a hand over her face. “Would somebody please tell me what the hell is going on?”
Em found herself feeling the tiniest tad of respect for an odd, wispy female who was far away from what she had any hope of understanding, but was keeping her chin up.
“Yes. I suppose somebody does owe you an explanation. But where to begin? How much do you remember about last night?”
“I remember following the vicar into church. I knew he was after the bats. I remember him screaming at me and pushing me to the ground. And I think I remember a rabbit – but that might just be a consequence of hitting my head on a stone floor.”
Agnes took over with a smoothness that Em could see wasn’t lost on Ginny. “We were about a minute behind you. Or Em was. I’m too fat to run. The vicar completely lost it, and he shot you in the neck. When we had subdued him sufficiently to be able to look at you, your heart had stopped…”
“That’s perfectly possible. I have suffered with a vagal arrhythmia for most of my life. I’m just glad there’s a defibrillator in the village. Who shocked me back to life?”
“There is a defibrillator in the foyer of the village hall,” Agnes said, “but nobody thought of that. Em Fed you with her own blood…”
There was an appalled silence.
“Fed me? Blood? Shot in the neck?” For a second Ginny teetered on the verge of hysteria, but then her fingers found the scar where the pellet had been. She flinched, but made a visible effort to hold herself together. “Is this some sort of Twilight thing?”
Em’s respect was growing. “Sort of,” she admitted. “But the difference is we’re real.”
Ginny studied her hands for a moment then gave Em a glare. “Okay, if I buy this, and I’m still deciding whether I do or not, what was in the Bloody Mary? The moment I drank it I felt as if I saw a lot of things clearer, and I also felt physically stronger than I have for years.”
Agnes chortled.
“Shut up Agnes.” Em ducked her head to disguise her own amusement. “Well, Ginny, it was a Bloody Mary. A real one. Yours just contained a thimbleful of blood. A drop from each of your six sisters to welcome you to our seven.” She watched Ginny’s face carefully as she dropped the last piece of the puzzle into place. “Virginia Cropper, vampire. How does that sound to you?”
Ginny shook her head as if to clear it. “Would you mind saying that again?”
“Virginia Cropper. Vampire.” Em and Agnes spoke together.
Ginny dropped her head into her hands then looked up with an exasperated expression. “But I’m a vegetarian…  Doesn’t there have to be a joke in there somewhere?”
Agnes was obviously making up her own jokes, so Em leaned over and clipped her smartly over the ear before she could share them.

Part 18 of Much Dithering in Little Botheringham by Jane Jago and E.M. Swift-Hook, will be here next week.