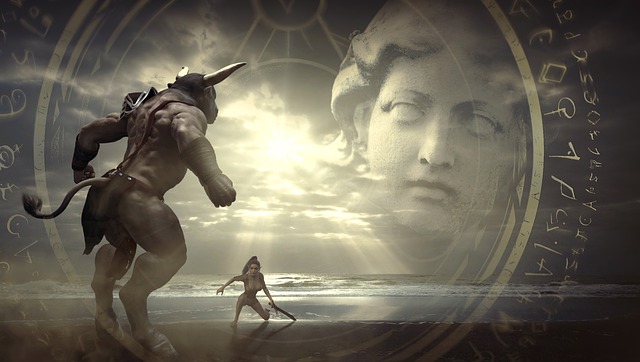 Hanna stood barefoot in the centre of the ring, her hands hung empty at her sides and she looked at nobody. ‘Breathe’ she reminded herself ‘breathe and focus.’ She held herself quietly quiescent, wondering who or what they would send against her this time. Being the champion held its own dangers and she knew the crowd was currently inimical. She was lean and scarred, and carefully emotionless. She had no glamour, and she didn’t know how to get the people on her side. All she knew how to do was survive. This was her seventh bout, and if she didn’t get killed this time they more or less had to let her go.
But that was for the future, for now she couldn’t afford even that glimmer of hope; she had to focus on the job at hand.
There came the sound of a brassy horn, and she heard the chain rattle of a lowering cage. She turned to see what she had to kill. It was no surprise to see a mythical beast, as a human fighter might be affected by her reputation. It was a Minotaur, and he shook the bars of his cage while roaring wordless threats at the small human female in the arena. He stood about eight feet tall, with massive shoulders and shortish bandy legs. His horns were tipped with cruel brazen spikes and he carried a Morningstar and a length of chain. She turned her back on him and looked to the Master of Ceremonies.
‘Choose your weapons.’
‘I choose a short sword and a net.’
A soldier trotted out of the tunnel carrying a short sword with a thick crosspiece and a very sharp blade. He also brought her a rope net about two metres square. Standing in front of her he passed her the net. Hanna was surprised to feel something hard in it, but she’d take any advantage, and with the bewildering speed of hand that was part of her armoury, she secreted a tiny knife in the thick braid of hair that ran down her back. As the soldier handed her the heavy sword he spoke. His lips didn’t move, but his message was clear. ‘Left handed. Watch the chain.’ Then he bowed formally and withdrew.
The Master of Ceremonies raised his voice and silence fell around the arena.
‘The Champion Hanna fights for her life. This is her seventh bout. The fight with which she seeks to buy her freedom.’
The crowd roared its approval, inexplicably warming to the tiny figure in the centre of the arena as the disparity between her and the gigantic Minotaur dawned on them.
‘Han-na, Han-na, Han-na’ the guttural chant filled the air.
Hanna switched off everything except for the necessity to listen for the unlocking of the Minotaur’s cage. Ah. There was the quiet snick of the meticulously oiled lock. She ran as swiftly as her legs would carry her, so that she was just to the right of the doorway as the portcullis lifted. The beast wasn’t fast enough to avoid a debilitating cut to his left arm, he snarled and tried to toss the Morningstar into his right hand. But he missed the catch, and Hanna danced in for another slash of her sword, this time cutting the right bicep. With his arms weakened, Hanna had to bet that her adversary would try to bring his razor-sharp horns into play. She danced back, careful not to trip over the fallen spiked mace and the Minotaur howled his defiance before dropping his head for the charge. Hanna knew she she dare not let him get close enough to gore her with the poison-coated tips of his horns so she moved with speed and caution until she could approach the beast from his left hand side. He turned to meet her, shaking his great horned head in bewilderment, and she knew a moment of pity for the half beast. She hardened her heart, knowing that the creature was incapable of feeling pity for her, and in full awareness that he would kill her without blinking one muddy brown eye.
The Minotaur dropped his head even further for a second charge and Hanna stood her ground for a second, before dodging to one side and making a leap onto the creature’s shoulders. Being behind the horns gave her the only chance she was likely to get and she reached around his brawny neck to slash the throat with her sword. She dropped to the ground with her chest heaving, warily keeping her distance as the blood poured from her opponent’s throat. He didn’t die quickly, but he was too strong for her to chance getting close enough for the coup de grace. As he finally dropped to his knees she looked into his lightless eyes before saluting him with her sword in the manner of warriors the world over. He raised his own fist to his forehead before falling on one side and breathing his last.
Hanna waited as the crowd chanted her name. For the first time since she was taken captive as a teenager she had hope. She lifted her head and met the eye of the Master of Ceremonies. He saluted her with his fist to his forehead and she allowed herself to smile.
She held her head high as she walked slowly through the Victors’ Gate. As soon as the gate closed behind her, a rain of crossbow bolts took her, flinging her around the empty corridor as if she was no more than a rag doll.
The Master of Ceremonies turned to look down at her broken body. He shrugged: the life of a slave meant less than his loss of face if he freed her.
‘Call my bluff, fighter’ he said softly ‘call my bluff’.

One of the stories in pulling the rug: a sideways glance at life in short fiction and verse

One thought on “Weekend Wind Down – The Life Battle”