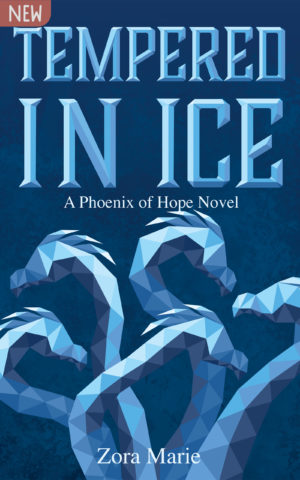 Tempered in Ice by Zora Marie is the second book in the series Phoenix of Hope which is an epic tale of elves, wizards, dragons, and gods.

As the sky lightened with the first rays of sunlight the next morning, Zelia fell to her knees near the lake, a puff of snow rising from the freshly covered grass. She had hardly slept as her ribcage constricted against the metal plate and her mind raced through her scattered thoughts. Why do I know her voice? Why don’t I remember? She had always known Xander likely manipulated her mind. He was the only one who could have, but she had no clue how much he had changed or why he would have bothered to mess with such memories. She had always assumed Asenten was the driving force behind everything that had happened, but maybe not.
The light crunch of snow gave way to a silvery voice. “Are you okay?”
Zelia’s heart lurched into her throat and she turned away, letting her hair cover her face. She wasn’t ready to face her, not without knowing what else lay trapped within her own mind. The snow crunched as the girl sat beside her. “Zelia, that is your name, isn’t it? You’re the one who saved me from drowning yesterday.”
Just leave me, please. Zelia almost begged in her thoughts, but didn’t say a word.
“That’s okay, we don’t have to talk.” The girl picked up some snow, and it crunched as she packed it. “Here, this is for you.” She leaned forward and dropped her work into Zelia’s hands.
It was reminiscent of Dain, the black wolf that had set in motion the events that freed her. “It’s beautiful, thank you.” Zelia looked up at the Elf who was about her size. Her silvery hair shone white in the starlight.
“I only wish it would last longer, maybe one day I can make you one of glass. You know, I don’t think I’ve introduced myself. I’m Linithion, Queen Eleanor’s niece. And no, we haven’t met before, well prior to you saving my life yesterday. I’ve only lived here for a few years.”
“Wait, you’re the Princess of the Drakeon Empire. Why are you here?”
“Um, that…”
Zelia watched her struggle over what to say. “You have powers like Eleanor, don’t you?”
“Not exactly…” Linithion rubbed her thumb over her fingers as she avoided meeting Zelia’s gaze. The way she did it reminded Zelia of Alrindel’s tick. It seemed to be a common tell among archers. Then Linithion heaved a huge sigh. “I see another person’s biggest fears and parts of their past when I make skin contact. I’ve been learning to control it, but I wasn’t in control when you saved me…”
“Oh… What did you see?”
“I…”
Their eyes locked for a moment, each reading the other’s feelings deep beneath the surface. Zelia couldn’t help but see how lost Linithion was. But at the same time, she could feel her meadow green eyes piercing her very soul. It was the first time she’d felt that way without wishing to pull away.
“You don’t know how to put words to what you saw, do you?” Zelia pried her eyes away from Linithion’s.
Linithion shook her head, but as soon as she stopped their eyes met again. “I don’t. But if you ever need to talk about anything, know that I’m here.”

Tempered in Ice  is available now or you can start at the beginning of the Phoenix of Hope adventure with Cast in Fire.

(1) If you found yourself in Zelia’s universe what one item from the modern world would you want with you?

Hm, could I have an unlimited supply of my allergy meds? If so, I would definitely choose that so I could actually enjoy some of the beautiful views.

(2) Do your animals inspire your writing or interrupt it?

I lived/worked on a small farm growing up, and my love of animals definitely shows in my writing. Though at present, I just have dogs, a couple of cats, a weird little lizard, and some fish… and the smallest dog is the most troublesome.

While he is my best bud, and is what has been keeping me sane, he is a handful at times. He follows me around the house like a shadow, reminds me to get up and walk around… and bites my toes if I haven’t played with him enough that day.

(3) What is your favourite fast food and why?

Arby’s is definitely my favorite, though that’s because they are one of the healthier fast-food options around here. I honestly seldom eat out though.

Zora Marie in her own words:

I’m an author, a graphic designer, and an actor. No matter what medium I work in, high fantasy is my favorite genre… and I love mythical creatures. That said, my work isn’t for everyone, I may write fantasy, but my books are really about the emotional journey of the characters.
Book two of the Phoenix of Hope series, Tempered in Ice, came out this April and I have to say that it is presently my favorite book that I’ve written. The love and compassion surrounding Zelia in this book is to die for and there are some fun surprises along the way… I wish I could say more, but I don’t want to ruin anything.
I should note that if you have read my other book titled Zelia, that you don’t need to read Cast in Fire as it is just the re-edited and rebranded version of Zelia… so go get yourself some more Zelia with Tempered in Ice.