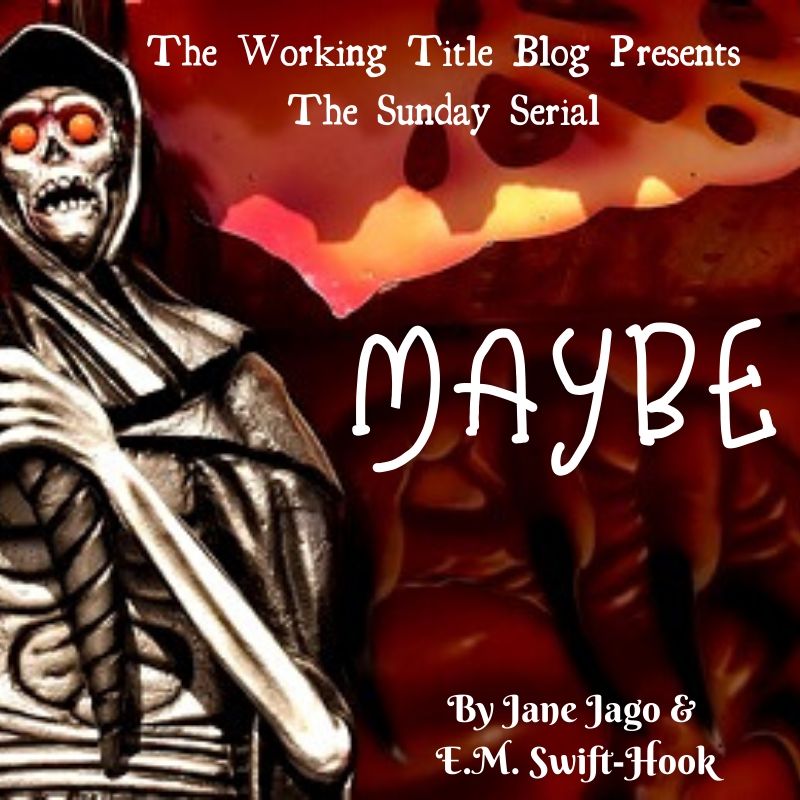 Maybe by Jane Jago and E.M. Swift-Hook . Sometimes we walk the edges of realty…

Half an hour later she was driving away, to somewhere. Anywhere. Just away. She stopped to eat the sandwich when it was starting to get dark and hunger bit, pulling off the road and into the carpark of what looked like a run-down, sea-side amusement park. Which was when she found it in the glove box. The gift from Roald. Part of her wanted to hurl it, unopened, away from the car. But instead she took it out of the colourful paper bag and lifted the lid. A necklace of silver beads, carved to resemble ammonite shells.
Throwing it out of the window, Jess swore violently and turned the key. Nothing happened. The car sat there. She tried several times, giving up only when she realised it was not going to happen. She picked up her phone to call roadside recovery, and was somehow not surprised to find there was no signal. With an odd sense of inevitability, she picked up her magnalight from the map pocket beside her. Its weight, as much as its light, gave her a sense of security, it could be a weapon at need. She pulled her walking coat on over her fleece jacket and left the car to see if there anyone around in the amusement park.
There was stiff sea breeze coming in from across the bleak scrub that lay between this place and the sea. A moon, nearly full, gave enough light that she did not need to turn on the torch, and slid it into the inside pocket of her coat. There were no other cars parked up outside what must once have been a bustling attraction. But who wanted a seaside holiday when you could go to Costa del Sunburn for not much more? There was a high wall which ran across the end of the car park and as Jess walked towards it, she could see it stretched away on either side.
The entrance was through a turnstile gate, or should have been. Someone had broken the spokes of the turning part, so anyone could walk through, past the shattered and blinded glass eye of the pay booth, boarded-up on the inside. Jess did so and something moved beside the booth. She turned fast, her hand gripping the magnalight as a slapping sound send a sudden pulse of unwanted adrenaline into her system. She pulled the torch free and shone its powerful beam at the source of the sound.
A sign hung down, still half attached to the top of the pay-booth, its broken back clapping against the heavy door set in the side of the small brick cabin. The words were barely visible:

Somewhere an owl shrieked and, despite herself, Jess drew a sharp breath. She took a step towards the broken, flapping sign and played the torch beam over it from end to end:

The owl screeched again and Jess smiled. You had to love it when the atmospherics played up to the occasion. It would only take a sea mist rolling in to turn this place into something out of an old-school Hammer Horror production. The really chilling thing was not any kind of supernatural danger here, it was the realisation that this was indeed an abandoned and empty place, with no one around who might have a phone she could use to call the roadside recovery and this place was a very long walk from anywhere. Only a year ago that would have meant very little. She might even have enjoyed the bracing breeze and the countryside at night. But not now. Now she would not make it more than a mile before she was crippled with pain.
The laughter carried on the night air, coming from behind the low roofed building immediately in front of her. At a guess it had once been some kind of cafe, but now it was heavily boarded up, metal shutters pulled over the windows, like a creature retreated into its shell.
Shelley’s Funpark? Why did that sound so familiar? Jess would have given it some more thought but the laughter came again, masculine, plural and loud. It was not from someone with any thought of trying to avoid attention. Still gripping the magnalight, its beam dimmed, Jessica made her way past the cafe-building and into the open area beyond.
The shadowy figures moving vaguely on the far side, close by the enclosing wall, sprang suddenly into stark relief and were revealed, as as an orange glow flared behind them. Jess froze, hearing drunken cheers as the fire took hold and watched as, like the ritual of some strange coven of witches, the group of youths all started throwing things into the flames.

Part 4 of Maybe will be here next week…