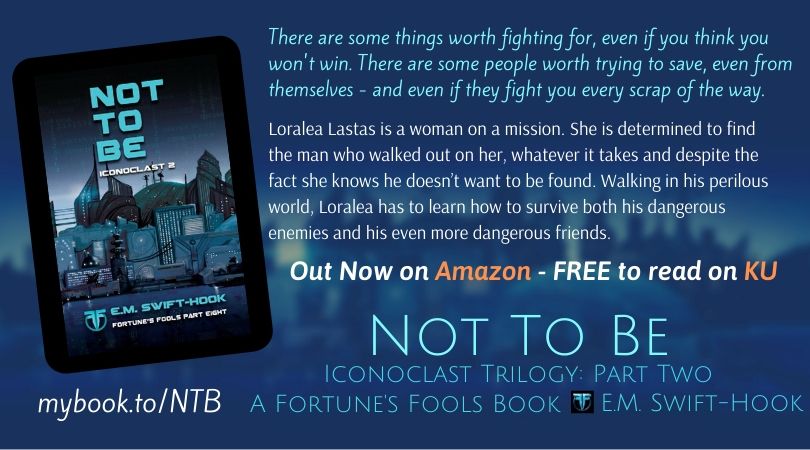 Iconoclast: Not To Be the latest Fortune’s Fools book by E.M. Swift-Hook is now available in ebook and paperback.

It was like walking around with a bomb in your head.
That wasn’t such an unfamiliar feeling for someone like Jazatar Baldrik who had served time in the Special Legion. There they plumbed a direct link into your brain and set it so that you had to keep connected to the data network lattice or it would fry out and kill you. Even if you made it through the five years of hell so you could qualify for release from the convict unit, as very few ever did, the device had a bad effect on the brain tissue it was implanted in and would kill you eventually anyway. Jaz had personal experience of that too. He had recently lost a friend that way. A man he had once considered as close as a brother.
But this was different.
Different because this bomb wasn’t going to go off and kill himself. When it went off, it was going to kill one of the very few people he actually cared about. Getting that news had been the most unexpected event of the day. But still only one in series of unexpected events. and that in a place where the unexpected was so rare it never happened.
For the past two cycles Jaz had been effectively imprisoned. Initially against his will and now with a kind of grudging acceptance, he was held in a secure clinic run by the terrorist organisation known as The Legacy. It was the kind of place where today was the same as yesterday and tomorrow wouldn’t be too much changed from that. Running to its own quiet, pre-planned patterns, nothing was allowed to penetrate which might risk breaking the steady rhythm of daily life. It was the sort of protected and predictable environment Jaz had never known any time in his forty-two years of life. He had even begun to feel safe.
Which was a mistake.
When they told him he had a visitor, he’d been a bit puzzled, but mostly just curious. It wasn’t like anyone he knew had any idea he was even here. So he didn’t expect it to be the kind of visitor most of the other inmates of this place got now and then.
It wasn’t going to be some family member who would look all concerned. Or even an awkward work colleague, checking up on how he was doing because someone had to and they had drawn the short straw at the office. Jaz had seen those kinds of people in the reception area sometimes, waiting to be taken through to see one of the inmates – or guests as the staff smilingly called them. There was even an elderly couple standing there now, the look of worried parents clear on their faces. Obviously distracted, they didn’t even notice him. He walked right in front of them and into one of the therapy rooms.
It took him a moment to realise who his visitor was and when he did, his first reaction was to turn himself around and walk right out again. He had to use some real willpower to make himself stand still and not do that.
Car Torbalen.
The man ultimately responsible for Jaz being put in this place and being taken very much out of circulation. Even thinking that was enough to make Jaz tense up all over. But, in a place where yesterday and tomorrow were both so much the same, he was curious enough about this sudden shift to see what it might be about.
Torbalen greeted him with a slight smile, holding out his hand like some formal event.
“Jaz. I was delighted to get your message that you wanted to see me today. Let’s go for that walk you suggested, eh?”
Something was wrong.
Jaz was more than sure he’d sent no such message. Even if he had the faintest idea on how he might have set about trying to get in touch with Torbalen, he would never have been inviting him over for a cosy one-to-one, walking in the grounds.
This man had effectively betrayed him. But the fact was Torbalen was standing there and knew that. He must also know he wasn’t going to make it on to Jaz’s link list in any conceivable future. Which made Jaz wonder enough that he didn’t deny or challenge what Torbalen had said.
There was nothing to read in the pleasant smile, because Torbalen was an operator with a lot of skill, but there had to be something important behind this. For him to step away from his so-busy life drawing in ever more fanatics for The Legacy, there had to be something pretty big on his mind. So Jaz took the offered hand briefly in a firm grip and said nothing. Then he went through the door which Torbalen had opened and walked out into the secure grounds around the clinic.

You can keep reading by grabbing yourself a copy of Iconoclast: Not To Be