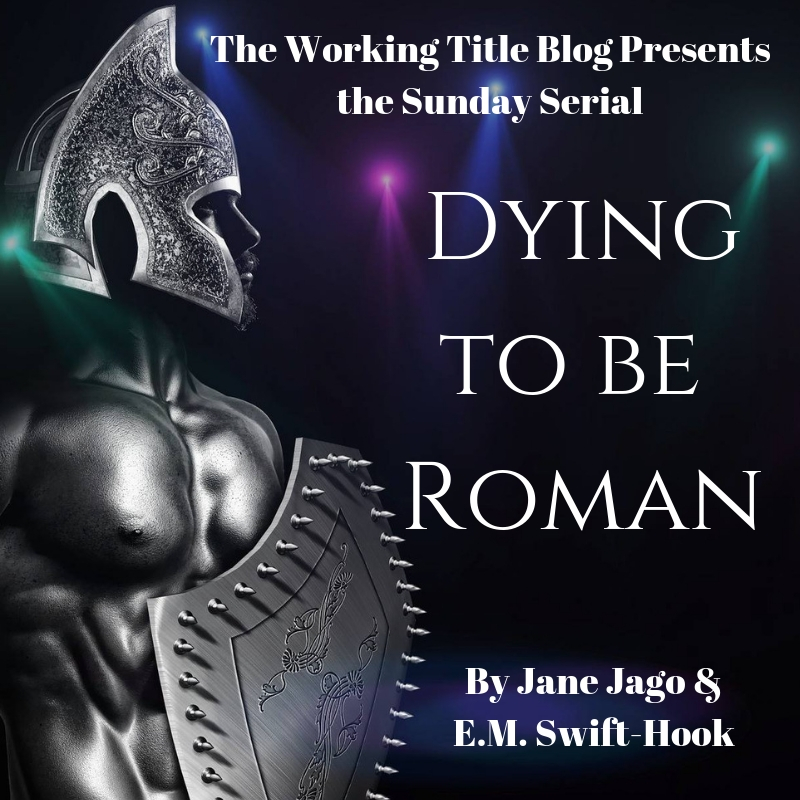 Dying to be Roman by Jane Jago and E.M. Swift-Hook is a whodunit set in a modern day Britain where the Roman Empire still rules. If you missed previous episodes you can start reading from the beginning.

She thought herself dreaming when she heard a crash from behind her, but the feral screams of her two captors as the room filled with praetorian guards alerted her to the fact she was actually being rescued.
“See to domina Julia,” a familiar voice snapped and she felt herself lifted gently, just enough to take the pressure off her wrists. Whoever had been tasked with freeing her arms must have had a very sharp blade because her hands were freed in an instant, and it was all she could do not to scream as the blood returned to her fingers. Somebody turned her gently, and then lifted her so she was draped across a broad, hard chest. Whoever it was kissed her abused cheek.
“We need an ambulance here.”
“We do indeed. And keep that futatrix alive. She will answer for her crimes in the arena.”
Julia made the almost superhuman effort needed to lift her head and found herself looking into the Celtic blue eyes she had filled her mind with when she had thought herself about to die. That was too much to compute and the world slid away from her as she lost consciousness.

Who knew how much later it was when Julia awoke fully to find herself in a small white bed in a small white room. She turned her head on the rather thin pillow to see Boudicca sitting on an upright chair beside the bed. The older woman smiled.
“They said you should wake up soon.”
Julia tried to sit up and Boudicca was quick to offer the support of a brawny arm.
“Sit still, girlie. I’ll raise the bed head for you.”
She was brisk and efficient, and soon had Julia sitting upright propped with a wealth of pillows.
Julia tried an experimental twitch of her shoulders. To her amazement there was very little pain.
“Just how long was I out of it?”
“Five days. The medics put you under because the damage was so bad. It was touch and go for the first twenty-four hours.”
Julia absorbed that and managed a shrug.
“Well. I’m still here.”
She looked into Boudicca’s eyes and saw worry lurking in their depths.
“Do we have a problem?”
“Sort of. I wish I didn’t have to explain this but they don’t allow men in here, so it’s down to me. You can’t go home, my lady.”
Julia smiled a sad twisted little smile.
“I should have known that shouldn’t I? For every patrician family that is grateful for our work here, there will be more than one baying for my blood.”
Boudicca nodded soberly.
“There are. Not only the ones whose daughters have been proved to be up to their armpits in murder and mayhem, but also those who have lost a lot of income because of the need to sever their links with the betting syndicates. I’m afraid you are going to be looking over your shoulder for a long time.”
Julia managed the ghost of a smile.

“But there’s more isn’t there?”
Boudicca looked as if she was chewing rotten meat.
“Aye. The three witches had it all worked out. Kill Rufus and Luca and take over the betting ring they had going, then, when they had a nice nest egg, bump off Decimus and return to Rome as rich widows. Marcella was the ringleader. She was supposed to share – but she got greedy.”
It all made sense and Julia felt a lurch of nausea.
“So the poor Britons really were killed just to put us off the scent…”
“That and to satisfy Marcella’s bloodlust. But we can’t put back the clock. Decimus says to tell you you can stay here while you make up your mind where next. And I have message from young Llewelyn. For all he’s had him and his decanus turn and about guarding this place, he can’t get in neither, but he says he promises he will see you soon as they let you out.”
“He will indeed. But what of him and his men. What comes to them?”
“Nothing but good. His team has been richly rewarded and Dai himself is now a man of some substance. The Praetor lobbied for, and got, Citizenship for him, and Decimus pulled a lot of strings to get him a job. He is now the Submagistratus in charge of law and order in Demetae and Cornovii. He takes charge as soon as the Games are over. There’s a nice little official villa goes with the job and last I heard he’s busy talking Bryn Cartival and his family into going with him.”
She wondered, briefly, how Dai would cope with being a Citizen when so much of his being seemed predicated on disliking Rome and all Romans. Except one, maybe, or was even that a forlorn hope? She gave herself a sharp mental slap and dredged up another smile for Boudicca, who she couldn’t help feeling wasn’t a bit fooled.
“They deserve every bit of good fortune,” she murmured before sleep overtook her once more.