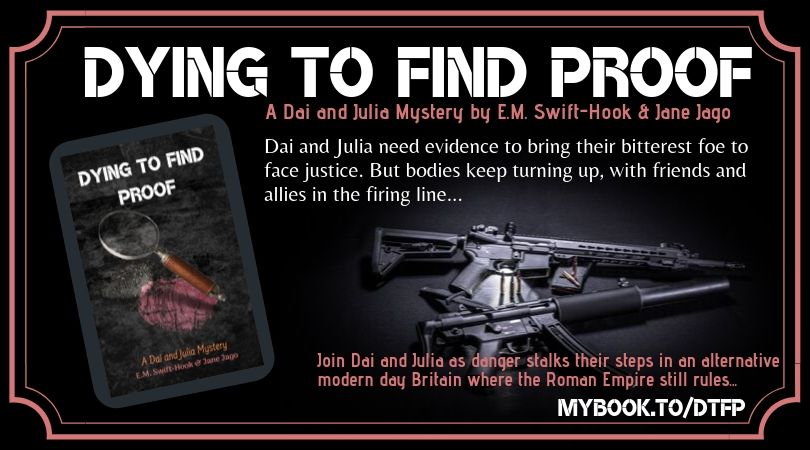 Dying to Find Proof is the tenth Dai and Julia Mystery from Jane Jago and E.M. Swift-Hook.

Dai waited until the two women had taken the last seats and Edbert moved to lean against the wall behind Julia. Then he lifted a hand to quiet the low murmurs of conversation and spoke into the ensuing silence.
“My friends, family, fellow Citizens and fellow Britons, we are gathered here today to plot the downfall of Magistratus Sextus Catus Bestia.”
A collective tension seemed to seep through the room. It was as if by naming the evil they had come to fight he had in some way upped the ante. Dai paused, both to allow his words to settle and to allow the chance for anyone to protest or respond. But there was a solid, supportive silence and those faces which had looked relaxed a few moments before seemed to grow more cold and stern. No one here was taking this lightly. They all had too much at stake.
“I thank you all for coming here today and taking time from the celebration to meet. I know I don’t need to do any introductions, there may be a couple of faces unfamiliar to you but we don’t have much time and I doubt we will be able to meet like this again – all in one place. We also can’t use regular channels.” He tapped his new wristphone. “Given the authority he wields, Bestia can have any or all of us monitored. SI Gaius has an idea to set up secure lines of communication and will tell us about those later. For now, it’s enough to know that we will all be able to keep in touch and to be aware that we mustn’t communicate anything outside this room any other way.”
He stopped talking and looked around at the sixteen other people in the room, for a moment, remembering too vividly the place challenging Bestia’s power had left him. An underground prison cell with its bleak despair and hopeless doom. He could not allow anyone else here to wind up in that place.
“But first I need to be sure everyone understands the stakes here. This is not a game where if we lose we get a screen turning black and a ‘play again’ button. If we mess this up it’s game over for good, for all of us, because don’t doubt for a moment we’d be made to betray each other.”
Enya looked as if she was about to deny that, but Dai could see the moment she noticed even the hard faces of Decimus and Gallus, both veterans of Praetorian battlefields, were not disagreeing with him.
“We know this,” Aoife said, sounding impatient. “So let’s get to what we don’t know.”
Dai nodded to acknowledge both her words and her right to say them.
“I just wanted to give everyone the chance to walk away from this and not get involved any deeper,” he explained, which provoked a throaty laugh from Lavinia
“I don’t think we could really be in any less deep than having agreed to be here in the first place. I can tell you don’t read much crime fiction. Remind me to gift you my back catalogue.”
Dai managed a weak smile.
“Um. Thank you.” He could see the meeting beginning to slip away from him already. “So, if no one wants to leave…?”
No one moved. Dai had not really expected anyone would, but he still experienced a relaxing of muscles he hadn’t realised he’d been holding tense.
“In brief,” he went on, feeling more confident now, “where as we know Bestia is the man who has been behind the headless murders last autumn, the killing of street women this spring and the attempt to have me condemned for treason last month, we have no hard evidence to back up our knowledge. What we now need to do is find solid proof that he did these things. And much as I would like to tie him to all three crimes as all those affected are equally deserving of justice, we have to keep in mind that we only need incontrovertible proof that he was responsible for one in order to have him arrested and condemned and thus stop him doing more and probably worse.”
It was not a thought he liked and he could see a few faces become a shade grimmer as people reflected on how they would feel if their own need for justice wasn’t met. Surprisingly, it was someone he thought would be the most urgent in their need for personal retribution who spoke up.
“What matters most is stopping this man,” Agrippina Julius said, her voice firm. “If that means SI Calvus or others have to take their justice at second hand then so be it.”
There were nods of assent from around the room, even if some such as Brangwen Broanan were more reluctant than others and Dai felt another lurch of relief. This was, as yet, an untried alliance and he knew it was down to him to somehow weave it together into a strong rope with which to hang Bestia.

You can keep reading if you snag a copy of the novella.