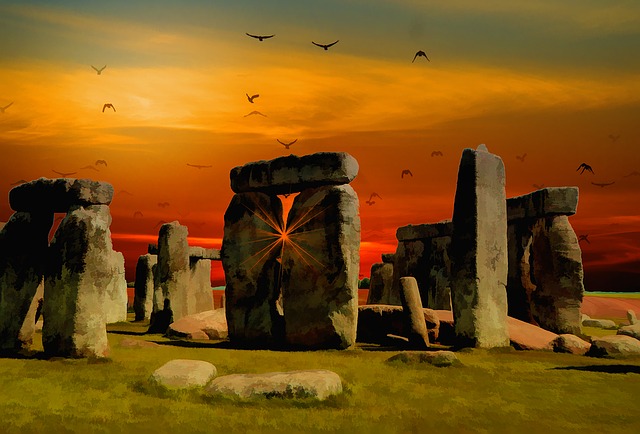 A flash fiction by Jane Jago. You can listen to this on YouTube.

Dermot and his brothers had been diggers all their lives. They earned their living digging, but they also dug for fun. Thus it was that the summer solstice saw them underground on The Plain setting to rights some tunnelling that was in more than the usual disrepair.
They were making good time so they stopped for a supper of doorstep sandwiches and ochre coloured tea with condensed milk from Erkie’s thermos. When they finished, Dermot, who was a being of few words, belched and cocked a thumb at the workings.
It was a goodish while later when their pickaxes hit rock. Or, to be more accurate, they hit one rock that stood smack in their way. It was a big one and seemed to have been driven right through the workings. Erkie give it an experimental shove and it rocked slightly.
“It’s as loose as a rotten tooth,” he grunted. “Do us take ‘n out?”
They looked to Dermot who licked the rock and sniffed carefully around the soil at its base. For a minute he frowned, as if trying to call something to mind, then he shrugged his meaty shoulders and gave Erkie and the lads an upward pointing thumb.
They set to work, scrabbling and scrooging in the dirt. To the uninitiated their approach would have looked shambolic, but there must have been some science involved, as the stone slowly began to list to one side.
“Aisy do it boys,” Erkie recommended, “us don’t want ‘n down here in the tunnel with we.”
The wisdom of this was generally acknowledged and the work slowed to a snail’s pace.
Above ground in the predawn darkness the men in white robes danced around the stones. The Henge had been there since before the ancestors of their ancestors, but the Druids still came there on certain nights to enact their rituals and pray for the souls of those who had already gone to the God. As the sun began to rise the dancers felt movement beneath their feet. This was not something they had ever known before and one by one they grew still and a little afraid. As the light reached the standing stones they watched, with a sense of horror that reached deep into their souls as the giant that was the king stone rocked on his foundations and began to tilt drunkenly. The High Druid would have rushed forward but his acolytes held him back by main force.
It was as well they did, because there came a sort of a sucking sound from the bowels of the earth and the stone that had stood proud for millennia fell to one side with an earth-shattering crash. As it hit one of the sarsen stones it cracked along its mighty length and dropped to the greensward in two sharp-edged pieces.
In the absolute silence that followed this disaster a brown face poked its way out of the earth beside where the stone had stood and a pair of bright, brown eyes blinked in the dawn light.
Dermot took in the scene of devastation, the broken stone, the weeping druids, and the rising sun that no longer lit the king stone in glory. He was so moved that he used up two days’ worth of words in one go.
“Oh bugger,” he said, before disappearing into the tunnel and signalling his crew to get back to work.