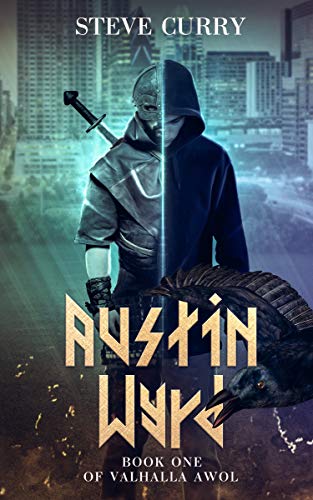 An extract from a new urban fantasy Austin Wyrd Book One of Valhalla AWOL and the first novel from Steve Curry.

“Ok that’s pretty plain. Honestly I can’t say I’ve ever heard anything like it. Not that I doubt you Doc, but are you sure it was a straight line spelling my name? That hardly seems likely.”
“I tell you lad” Surprisingly he’d stayed away from a lecturing tone so far. “I was as skeptical and shocked as you. Spit a currant clear across the room. I dare say boy; let that be a lesson to you about reading of the runes while breaking your fast. There were oats and red currants all over the table. Of course, I couldn’t leave it at that and did a second casting. That’s the one that came up with death and waves of red.”
With the coffee brewing, we sat and discussed the exact orientation and location of each of the runes in his spread. That discussion was interrupted once when I realized that Grimmrr was dozing on the bed again. I swear it’s his bed more than mine. And a second realization was that the damned fox was gone. “Doc where’d the damned fox go? He’s not in there trying to eat my bird again?”
I was already at the doorway peering in to see Rafe stalking one of the grasshoppers when the professor answered. “What fox?”
That’s one of his games I hate. I’ve seen that fox dozens of times, always with the professor, and he has never once admitted that it exists.
“Besides he only grabbed one flight feather. Rafe is already flying again. No harm done.” Consistency was never part of conversations about the fox. I had no doubt that if I tried to follow up the inconsistency of a nonexistent fox only taking one feather, Eachan would once more reply with “what fox?”
Enough is enough. I shook my head and grabbed a couple of thick stone mugs. Filling each with the rich aromatic coffee, I placed one in front of the professor and sat down with my own. Brown sugar and a smaller pitcher of heavy cream were already on the table along with some scones the prof had brought along. That occasioned a lengthy and pleasant lull in conversation as the scones and red-brown coffee with cream required a certain level of commitment and concentration. It left me just enough free will to divert my thoughts to the runic revelations as well as Eachan’s restraint in questioning me.
Eachan knows I have a strange and shadowed history. He’s always had the courtesy not to press me too much about it though. Perhaps his old-world manners come from being a modern pagan and educator. The curiosity probably ate at him on a minute by minute basis. Would it have surprised me to find out he’d been delving into my past with his runes? Not particularly. Would it have upset me? Again, not particularly. However, it might have surprised me if he’d uncovered anything too deeply hidden.
I’m no slouch with those same runes. That’s possibly what had drawn us into our odd little friendship. We’d bumped into each other at a coffee shop and he had noticed and remarked on a bit of runic work in one of my earrings. Normally I’m better about concealing runes, tattoos, symbols and identifying marks you know? I guess Verdandi or one of the other two Norns had given me a little nudge. I mean, I doubt I’m completely hidden from those three. All seeing goddesses of destiny are hellaciously hard to hide from. Norns have an unfair advantage just like ancestral watchers called Disir or a couple of Ravens I don’t even want to think about much less name and a similar pair of wolves. The only reason I don’t worry about the Big Eye-patch in the sky is I’m probably not really worth his time.

A Bite of… Steve Curry

Q1: If you could take your main character out for a drink where would you go and what would you most want to talk about?

That is a very good question indeed. I had to stop and actively consider. You would think it would be easy. Magnus is top “Security” guy and assistant manager at a heavy metal and Goth themed bar in Austin Texas. Helstyxx would seem to be the instant choice. However the bar seems to be a magnet for trouble so we’ll skip that for a conversation. I considered a few cups of coffee and the mega-breakfast deal at Waffle-shack, (a chain comprising of perhaps three locations thus far and all of them are somewhere in my head.) But finally, Magnus, in my current WIP, is in the “Big Easy”. Perhaps, if he extricates himself and everyone important from whatever havok is about to occur we can go to a zydeco dive and enjoy the obligatory buy-one-get-three buckets of beer, Abita Amber would be the logical choice. Once there we’d have to talk about Runes, and what it might take to get Freja or maybe Asa Thor to intervene and get a skaldorly inclined fellow into one of their domains rather than the primal machismo of Valhalla or the plain boredom of Hel.

Q2: What were the high and low points of writing your first book?

We’ll start with the low point. I never had any confidence in writing. My wife pushed me at it for a couple of decades after various RPG games and sessions but I was highly resistant. Once I started writing during downtime at a regular job, well it took me two years to knock this book out. Another year of dithering about it, and perhaps most of a fourth year to finally pull the trigger on this puppy. The high point? Pulling that trigger and sending messages to a bunch of friends and family with the Zon page and pre-order status. Not for sales, but more of a “Hey! Look what I finally did!”

Q3: If you could live anywhere in the world where would it be?

Right now my hometown in Lubbock, TX is top of the list. My mother is ageing, my kids are grown and starting their own families, and my first granddaughter is about to start kindergarten. I wouldn’t miss these years for the world. After that though? I’ve travelled a ton and my wife still thinks about it. A nomad life would fit either of us, if it weren’t for a mongol sized horde of cats and a couple of oversized and worthless hounds. To settle someplace else? We both loved the energy in Sedona AZ, or Taos New Mexico and I personally fell in love with the people, the geography and  much more in Utah.

Steve Curry is a fledgeling author just beginning to use a spread of experiences and careers. His current forays into writing are Urban Fantasy infused with Culinary tidbits from a decade as a Le Cordon Bleu chef. Military weapons and protocols plus realistic medical and physical descriptions abound from his work with Uncle Sam’s Army NBC branch and time as a Licensed Respiratory Therapist in ICUs across the nation. Toss in lots of mythology, new age religion, supernatural goodness and real world history along with a soupcon of Jim Butcher’s humor, and a few pinches of Robert Parker’s character building traits to see how he’ll entertain you.
He currently resides in West Texas under the management of a yellow hound dog with claims on most of a large bed. Others in the hierarchy are an imperial princess and rainbow unicorn riding granddaughter, his wife, the imperial queen and mistress of eyerolls, and an uncountable horde of invading mongrel cats. You can find him on Facebook and his own website.