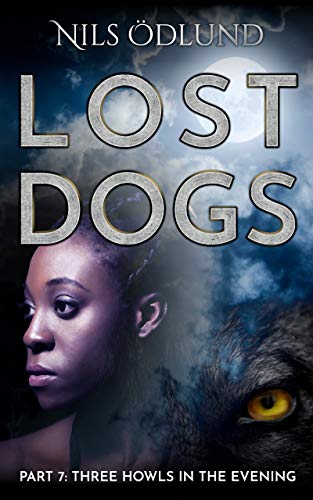 When she came to again, the beast was gone, and she lay on her side in the mud. The wolf was nearby, and when she raised her head to look she saw it standing with it’s paws on the fallen tree she’d sat on earlier.
“Oh, hey,” she said, and a stupid little smile tugged at her lips.
The wolf just looked at her.
Huge, and completely black. About the size of a small pony, or so it felt from where she lay on the ground looking up at it. Jaws that’d crack her arms like biscuits.
Alene swallowed and pushed herself up to sitting. The wolf wouldn’t attack her, but that didn’t mean she had to grovel in the dirt before it. She made to pick some dried leaves from her t-shirt, but stopped herself, sighed, and cursed under her breath. Her entire right side was covered in mud, from her feet and up to her shoulder. As if it wasn’t enough that she hadn’t had a shower for two days, she had to go rolling around in the mud as well. Stupid.
The wolf snorted and hopped down from the fallen tree, away from her on the other side.
“Yeah, whatever.” She got to her feet, brushed her hands off on her hips and got even more mud on her right hand. “It’s fine. I’m okay. Off with you.”
Her cheeks warmed, and she pressed her lips together. Even after two years of being a terry, talking to someone in their animal aspect still felt weird to her. She knew Roy was in there, and she knew he could understand her. Only, her eyes still saw a big wolf, and wolves didn’t speak.
“I’m sorry…” She blushed again. “I mean… I’ve got this. You can be on your way now.”
Alene raised her hand and pointed east, or somewhere like it. If he’d just be on his way she’d get the rest sorted. He probably had a towel in his backpack she could use to clean herself up a little before she went back into town, but she wouldn’t go rummaging through his things when he was still there.
The wolf looked at her for another moment, and then it turned around and headed off in the direction she’d pointed.
In the back of her mind, the beast began to growl.

Q1: How much of you is in the hero/villain?

There’s no distinct villain in my stories, but I think all of the main characters show various sides of me.
Roy is probably the one who’s most like me as a person, while Alene is more like someone I’d wish to be like – minus the Beast. I’d like to think that neither of them is a carbon copy of myself though. But there’s probably more of me in them than I’d like to admit.
I get quite close to my characters, so it’s hard to avoid completely.

Q2: Is it important to include all shades of belief and sexual orientation in a book?

There are a lot of shades, and I don’t think you can reasonably include all of them. Diversity is important though, and it makes for a richer and more interesting world if there’s a varied cast of characters in it.
I try and include characters with different skin colours and sexual orientations, but so far, neither has been a major issue in any of my stories, so it’s not very prominent. It’s part of the backdrop against which the stories play out though.

I’m a big fan of coffee, but I’ll have coffee with the cake, not in it – although, in a pinch, I don’t mind coffee cake. I just prefer chocolate cake if it’s an option.

Nils Ödlund is originally Swedish, but lives these days in Cork, Ireland. He took up writing as a hobby at some point in 2010 (or maybe ’11), and it quickly grew from an idle pastime to a minor obsession.
Since the beginning of 2019, Ödlund writes full time, and tries his best to reduce the amount of time spent writing in cafes and pubs. Writing in the company of a good coffee, or a pint of Guinness, is pleasant and enjoyable, but there’s such a thing as too much of a good thing. Also, it gets expensive.
Unlike every single other author ever, Ödlund does not have a cat.