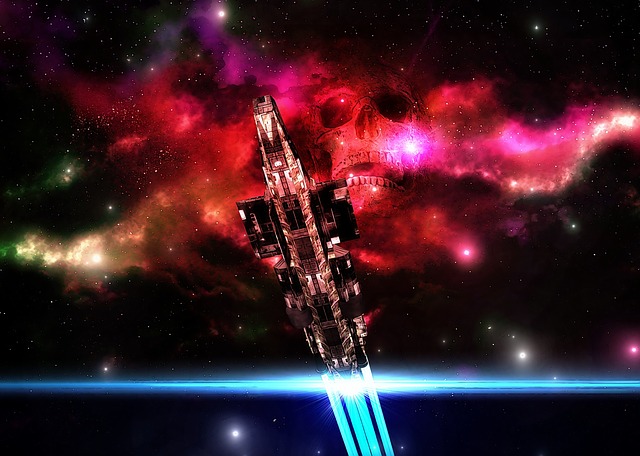 “We got another big day of writing ahead of us, I know you have it in you. Dig deep.” I wiped Captain Smith‘s spittle off my face and nodded. I had heard it before. Hell, we all had. We had been on the Shakespeare for so long we had forgotten where we had come from, let alone where we were going. Sure, there were legends, but like all the stories on the ship, they got twisted to make them more entertaining, anything for a laugh, to amuse the cargo.

The Captain’s magneto neck coils glowed red, and I refocused. She wasn’t a happy Captain being ignored. “Now, I need a volunteer,” she growled. “Which one of you hacks has hit the wall?” I held my face straight as she clumped past the rows of writers, her one good eye flickering red. The diodes must need replacing.

Inside I trembled. The table behind her had a pile of red shirts on it, and we all knew that meant a suicide mission. “Please pick me,” I heard someone whisper, then realized it was myself. I bit my lip, and stepped forward.

Behind me the room rustled as others also stepped forward. Captain Smith flicked a glance at them and they retreated. I held firm, this might be my only chance. She was so close I could feel the heat from the coils on my face. “You ready for the red shirt, hack? You think you’re burnt out enough for this job?”

“This your second or third millennia?”

“Forth, ma’am. I was in the original intake, I wrote my first story and got transferred from the science section.”

I heard the others gasp. With all the rejuvenations we took, most of us looked different year to year. Hell, I couldn’t remember if I had been male or female when I came on board. I was pretty sure I had been human, unlike the evolved cats who still retained a certain tendency to whiskers.

But I still remembered signing up. A five year tour they told us, to get to the nearest system with planets. The ship was a longevity one, with a pile of rich bastards that lay like logs in cold storage, while we kept on rejuvenating. And writing. To keep the cold storage passengers mentally alive, stories were channelled directly into their brains. But they always wanted more.

Their reviews got fed into the computer and controlled our lives. The computer ran the ship, we were nothing more than rats in the tunnels, tapping buttons to get review stars. The more stars, the more rations. But we went through a meteorite storm that first year, and something happened to the computer. It announced we were to refer to it as “Zon” and then it never spoke to us again, although it did monitor us and our reviews.

“Right, you, come to my office,” Captain Smith barked. “The rest of you hacks, go pound out some words.” She paused. “I know you still have some left. Dismissed.”

I glanced at the others as I followed Captain Smith out, the red shirt clutched in my hands already damp with sweat. Their haggard faces gave me courage. They had run out of stories, we all had. But the audience was insatiable.