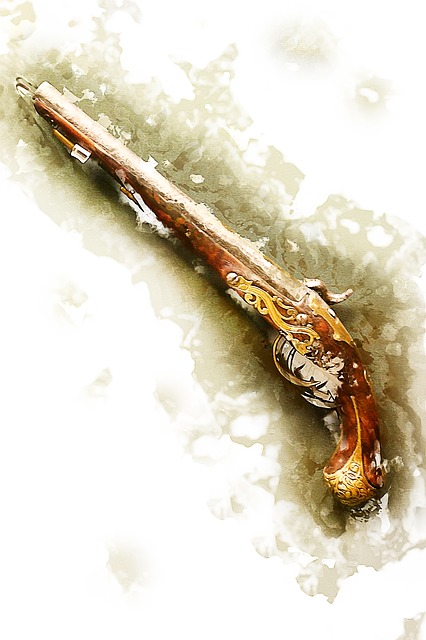 “That was well enough done, my lord, aside that you allowed Mags his head. That one is a troublemaker. Too sure of himself and too popular with the men. He needs taking down a peg or two.”
Nick instantly fell back through time to the days when Hoyle had been given the charge of educating the Tempest boys in the use of sword and firearms. But Nick was no longer twelve years old and he was no longer willing to allow himself to be dominated by Hoyle.
“Thank you, Sergeant, your views are – appreciated,” he said, cooly.
He might as well have not spoken. Hoyle merely nodded then carried on talking in the same overly familiar manner.
“I’ll be happy to see to it myself. Of course, you know why they call him Mags?”
Nick felt a stab of irritation. His eyes passed over Hoyle and he snapped:
“No, Sergeant. I will ask him myself.”
Hoyle turned, following Nick’s gaze. The man they called Mags was sauntering towards them in an unhurried way, a heavy wool cape flung back over one shoulder to show the well-worn leather buff he wore beneath. The faded sash tied around it held a pistol and a long-bladed sword banged against his legs slightly as he walked. Like the others in the troop he was wearing newly issued boots, rolled down from their protective length into bucket-tops so he could walk more easily when dismounted. Under a drooping brimmed hat, his light brown hair, flecked through with a peppering of grey, was long, tangled and greasy and his weather-beaten face was half-hidden by a crudely trimmed beard.
As he reached them, Mags swept off his hat, revealing an ugly patch of scarred flesh on his scalp where the hair could no longer grow. He replaced his hat with a muttered apology and looked up at Nick waiting for permission to speak.
“So what is it you wish to tell me?”
“I know the lad – we fought together. I reckon if you want him found that badly, give me enough coin and I’ll find him for you.”
Nick bridled at the demand.
“You are well paid already and the prize money should you find him is more than enough.”
The older man sucked on his lips and shook his head. “You get me wrong, sir. I’m not asking more for myself, but if you want the people I could ask to give up what they know, they’ll need recompense.” He paused and spat in the grass then wiped his mouth with a grubby shirt sleeve. “You see, this isn’t like hunting a regular criminal. Half the county is terrified of him and the other half would as like as not burn in fire rather than give him up. Your hirelings’ll find no word – save misdirection, I promise you.”
It was likely true enough, Lord seemed to cast an enchantment over those he encountered. Nick’s father had said it was the power of the Devil himself. Still, true or not, the man standing in front of him now gave no appearance to inspire confidence.
“They call you ‘Mags’,” he said eventually.
“They do. It’s short for Magdeburg.”
“Magdeburg?” Nick could not keep the surprise from his voice. Magdeburg, the city of Protestant martyrs, put to sword and fire by a Catholic army over ten years past. He recalled the outrage of his family when the news reached England’s shores. Even today the horror of it remained fresh. Protestant troops would offer their enemies ‘Magdeburg quarter’ – the chance to surrender and die.
“Yes, sir. I was at Magdeburg with Tilly and his butchers. I watched the Elbe run red with blood.”
“You fought for – ?”
“I were with the cavalry. We rode under the command of Graf von Pappenheim.  I could tell you the tale of the battle, it makes fine telling but not what you want to hear right now, I’ll warrant.”
“Before God,  you are telling me you fought for the Catholics?”  Nick was horrified.
“Right back then I’d have fought for Satan himself if he’d paid for my sword. Not that we got paid, mostly we just took what we could.” Mags hawked and spat again. “I met him there – the lad you’re looking for.”
“Philip Lord? He was fighting with the Emperor’s forces?”
“No. Funny thing that, he weren’t fighting at all, just wanting to get into Magdeburg, I ne’er did find out why.”
“You disliked him then?”
The older man shook his head and gave an impatient shrug. “I liked him well enough. Even if he were too pretty and too clever for his own good and still is I hear.”
“You like him but you’ll hunt him down?”
Mags looked nonplussed.
“It’s not as if he’s kin. You’re paying my wage and I’ve a good pair of new boots from you as well. I’ll hunt you down the Archangel Gabriel if you pay me.”